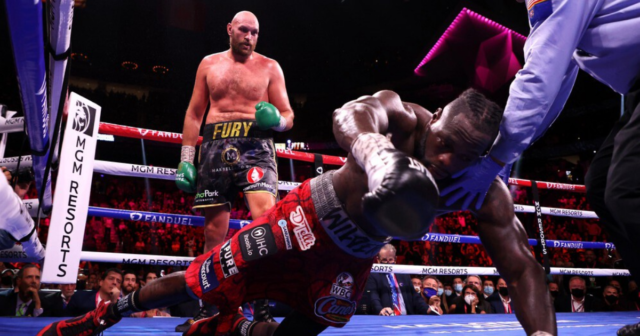 TYSON FURY was seriously considering hanging up his gloves after his latest victory over Deontay Wilder, claims his cousin Andy Lee.

The pair, both world champions, regularly work together in the gym with the Irishman performing the role of assistant coach to the star.

The Gypsy King, 33, retained his WBC heavyweight title last month when he defeated the Bronze Bomber in their thrilling trilogy showdown.

But Lee says that Fury told him over a coffee beforehand that he was leaning towards retirement.

However, now with victory under his belt and the prospect of an all British clash against mandatory challenger Dillian Whyte on the horizon, the fan favourite will get back into the ring to defend his belt.

Lee told TalkSPORT: “Well I arrived in Morecambe a few weeks ago, the first day we went out for a coffee and I said, ‘What do you do? Do you retire, do you hang them up?’

“He said, ‘Well, I’m thinking that way.’ And then he said, ‘On the other hand, what else am I going to do with my life?’

“He loves to train, he loves to fight and although there are no challenges out there for him, he can still take a lot of pleasure in cleaning out the division and beating up these other guys and also earn a hell of a lot of money while doing it.”

Discussing the showdown with Fury, Lee also revealed Fury’s excitement over his upcoming defence against Whyte.

“He is enthused by that, that’s what he is talking about to me so I can see that being the next one.”