Is Hughie Fury related to Tyson Fury, what skin condition did he suffer from and what is his boxing record?
Advertisement 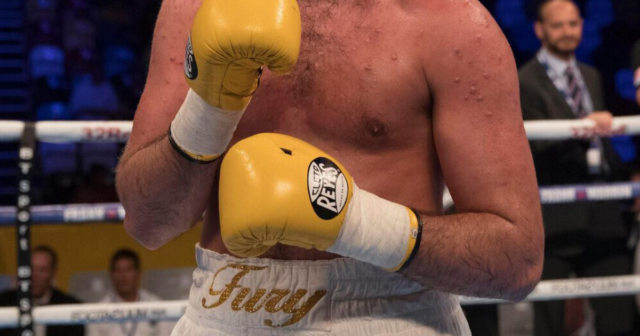 HUGHIE FURY recently beat Mariusz Wach on the undercard of Anthony Joshua vs Kubrat Pulev, and is destined for big things.

The 26-year-old won by unanimous decision against the Pole and now has 25 wins from his 28 fights.

How old is Hughie Fury?

HAILING from a boxing family, Hughie has been trained by his dad Peter since his teens.

Hughie is the cousin of ex-heavyweight world champ Tyson Fury.

Father Peter also previously trained Tyson, including for his world title win over Wladimir Klitschko in 2015.

Did he have a skin problem which nearly wrecked his career?

The illness that would leave his scar-riddled body ravaged, his energy levels depleted and his spirit at rock-bottom – with the side-effects of the prescribed medicine hindering him further.

He told ESPN before the Parker fight last year: “That’s all behind me now. I’ve got a clean sheet, I feel a different person and a lot stronger. My body wasn’t allowing me to do a lot before.

“It would put me out for two weeks at a time before the fight which was three or four weeks away.

“I just had to stop because I was worse off for training. I had a skin condition which was poisoning my blood and over the years it has got worse and worse.”

“I’ve had it for years, before my professional and amateur careers and it was difficult to live with.

“It put my immune system down. I saw people going forward and I was just going backwards because of it.

“It was horrific. I would try a shirt on and it would be covered in blood and every time I sparred my T-shirt would be soaked with blood.

“I’ve had it sorted for a year now. I took medication [Roacutane] for six months and it’s just gone now.”

What is Hughie Fury’s boxing record?

FURY’s only defeats in the pro ranks have been to Joseph Parker, Kubrat Pulev and Alexander Povetkin.

In 2012, he competed in the Youth World Championships, representing England, and took the Gold medal in the super-heavyweight class.

Who is Peter Fury?

A NOTORIOUS name in the North West, Peter Fury has a murky past in Manchester’s underworld.

He was jailed for ten years in 1995 for possession and intent to supply before being slapped with another charge in 2008 for money laundering.

But he now claims to be on the straight and narrow – putting that down to training nephew Tyson and his son Hughie.

He said: “I’ve just finished paying nearly a million quid to the Government.

“Now I have to show people that I don’t get into anything. I’m a recluse, really. The police have a lot of informants and intelligence, so they know I’m not active in anything. I’m happy with that.”