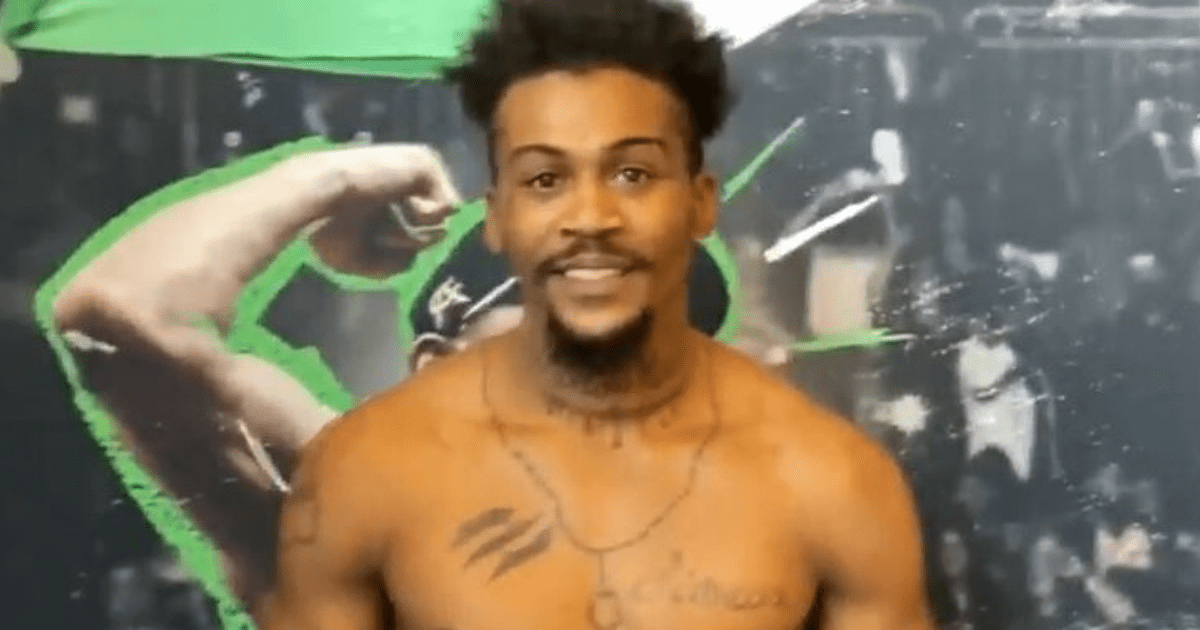 BOXER Isiah Jones has died aged 28 amid reports he was shot during a dispute with a family member.

Jones’ trainer Roshawn Jones (no relation) told The Ring the American had been arguing with his brother.

American fighter Isiah Jones has died after an alleged shooting

Jones was one of the stars of the Top Rank bubble era on ESPN and fought on DAZN as well.

Isaiah Jones (9-7-0) is a Pro Boxer out of Detroit, Michigan, a fellow member of Soul City Boxing and Wrestling Gym, our last fight was against Roy jones jr Promotion Team! Isaiah, Lost his life yesterday in a tragic event! Please keep his family in your prayers @trboxing pic.twitter.com/ekZQRxcUir

The Top Rank bubble star was allegedly shot at an address in a street in his home town Detroit on Monday evening.

Police say a 28-year-old man was killed in an incident involving a relative on Monday evening.

A murder investigation is under way after the shock death of Isiah, who turned professional after winning the 2016 National Golden Gloves and also fought on DAZN.

Roshawn Jones paid tribute to a fearless fighter – but revealed he had asked Isiah to move to Ohio for safety reasons.

He said: “Him not turning down fights, every fight that he took, the odds were stacked against him.

“He had enough heart and courage to take them. He could have taken the easier route and just padded his record.”

But he admitted he had been worried about Isiah still living in Detroit.

And he added: “When you’re living in poverty there is more frustration, more stressful energy. When you’re poor it’s easier to get mad.”

The fatal incident reportedly took place at around 6.26pm in the 9300 block of Stout Street.

The Detroit Police Department have yet to reveal further details.

And Roshawn Jones tweeted: “Lost his life yesterday in a tragic event! Please keep his family in your prayers.”

He moved back to Roshawn Jones for his last contest, a unanimous loss on points to Andrew Murphy in July.

The Ring say Isiah was in training while seeking another fight at the time of his death.

The first step towards improving your boxing technique is to watch some good boxers fight. Pay attention to how they move and throw punches. Also, observe how they defend themselves. Then try to imitate their techniques.

Next, you’ll need to spar against another boxer. This is where your ability to improve your boxing technique will be revealed. You’ll notice how fast and strong you punch, as well as how effective you are at blocking incoming punches, when you spar.

Finally, you’ll need to practice your boxing skills by doing drills. You will improve with practice so be patient and persevering.

Boxing is one of the oldest martial arts known to man. Boxing is one of the most difficult sports you can play. You cannot just punch someone in his face and then knock him out. You should know how to defend against punches, kicks, and other attacks.

First, find a gym that offers boxing. Once you’ve found the right place to train, it’s time to purchase gloves and a headgear. Gloves protect your hands and the headgear your head. You will also need shorts and a shirt.

After you have all the equipment you need, it’s time to get warm. Start off slowly and gradually work your way up to full speed. When you feel ready, hit the bag and spar with another boxer. Don’t fret if you don’t succeed. Just try again until you nail it.

If you’re looking for a partner to practice boxing, you can watch boxing matches on television. You can also find an amateur boxing gym near you. Amateur boxing clubs hold regular training sessions. These sessions typically involve sparring partners, who often hit pads together.

A punch is “a blow delivered from the fist”. Only one punch can be sustained by a human. When someone hits you in the face, he/she is punching you. You cannot hit him/her back. That would be two punches.

How can I improve my punching form?

Boxing is all in the form of punching. You must develop good punch technique if you want to become a better boxer. These are some tips that will help you improve your punching technique.

Boxing is a sport that involves two people who try to knock each other out by hitting them in the head and face. The object of boxing is to hit an opponent as hard as possible without hurting yourself. This can only happen if both boxers are able to throw heavy punches. They must also have good hand eye coordination.

Your goal in learning boxing is self-confidence and improvement of your physical fitness. Boxing has become a very popular sport. It involves strength, speed and agility.

There are many options for boxing training. Some are held at health clubs or gyms, while others can be done at home. There are also online courses which allow you to study from anywhere in the world.

You should ensure that the program you select meets your lifestyle and goals. The best programs will include exercises that help build muscle mass and flexibility, improve cardiovascular endurance, enhance well-being, as well as increase overall wellbeing.

Consider whether you prefer a beginner or advanced course. Basic techniques and drills are taught in beginner’s programs. These include shadowboxing and sparring, mittwork, and punching combinations. Advanced programs cover more complex movements and offer more variety.