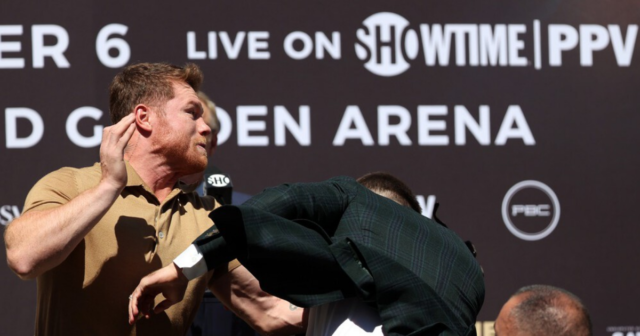 CANELO ALVAREZ opened up about the ‘bad blood’ he has towards Caleb Plant – which is more than he has had for any other opponent.

Canelo Alvarez during his brawl with Caleb Plant

But the fight threatened to start early at their post-fight press conference in September when the pair brawled on stage.

Initially Canelo pushed Plant, who then walked over to him and landed a slap, but took a left hand for his troubles.

It has left the fight with more than just belts on the line, with Alvarez at never-before-seen levels of animosity.

He said: “It’s new for me to have this much bad blood with an opponent.

“It’s very different from normal and it’s definitely the most animosity I’ve had with an opponent heading into a big fight.”

Canelo, 31, was on the receiving end of a verbal onslaught from Billy Joe Saunders, 32, in May before their unification.

But Brit Saunders was made to pay after a brutal right uppercut in round eight left him beaten and later nursing FOUR face fractures.

Canelo has now warned it will take even less time to inflict damage against Plant, 29, who is unbeaten in 21 fights.

He said: “I’m sticking with my prediction of a knockout before round eight.

“The first couple of rounds will be difficult, but as the fight progresses, I am going to be able to get him out of there.

“I delivered the message I had to at our press conference. I don’t have to say anything else to Plant.

“I’m just going to prepare to face him in the ring on November 6.”

Canelo is boxing’s pound-for-pound No1 and current top attraction.

He has beaten star names such as Miguel Cotto, 40, Gennady Golovkin, 39, and Sergey Kovalev, 38, in recent years.

And with only one defeat to Floyd Mayweather, 44, in 2013 and world titles in four divisions, Canelo claimed there is nothing Plant can bring to the table that he has not experienced before.

He explained: “I’ve never been involved in anything like what happened at the first press conference between me and Caleb.

“I’ve been in the ring for huge fights like this a lot of times. For him, it’s going to be a challenge being in there for a fight of this magnitude for the first time.

“He’s going to have to control his emotions.”

Canelo Alvarez during his open workout before fighting Caleb Plant 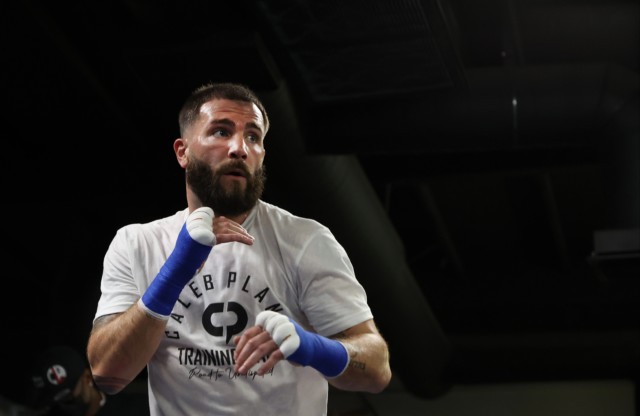