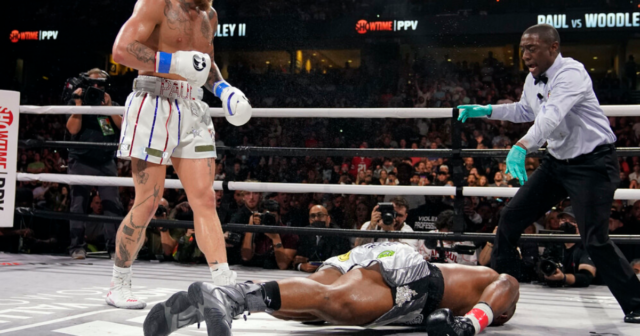 JAKE PAUL admitted his rematch with Tyron Woodley was not his ‘best business night’ but slammed ‘bulls***’ rumours it flopped on pay-per-view.

Paul brutally knocked out the ex-UFC champion in round six, but only faced Woodley again after Tommy Fury initially pulled out.

According to a DAZN report, only 65,000 PPV buys were projected through cable or satellite.

That number – which does not include digital purchases – was nonetheless shot down by Paul.

“But remember.. Everyone wanted to see me Vs. Fury and that’s what we sold.”

Paul, 24, was set to face Fury, 22, this month until the British former reality TV star pulled out with a broken rib and chest infection.

Fury’s fight withdrawal means the social media sensation is yet to face an opponent with prior professional boxing experience.

But Paul publicly thanked Woodley and US network Showtime for allowing the show to go on.

He added: “Shoutout to Showtime for riding with me and all the fighters on the card and Tyron for not being a bitch like most of these “fighters” are..”