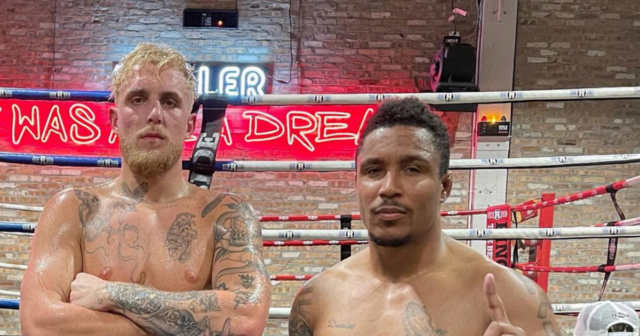 JAKE PAUL ‘bullies you’ in the ring and is a ‘very aggressive’ fighter, said his training partner who revealed sparring secrets.

The YouTuber has been sparring MMA veteran Anthony Taylor before his last two fights.

And Taylor opened up about the secret sessions and the come forward boxing style Paul is developing under trainer BJ Flores.

He told Betway Insider: “Jake’s a bully, he bullies you.

“He comes forward, very aggressive. He will overwhelm you if he has to. Luckily I’m used to training with guys as tall as he is.

Jake is very strong, very quick – surprisingly for a guy who is a YouTuber turned boxer – the guy is a natural athlete.

“Jake overall is an aggressive guy in the ring. He has a great heart, he has a hell of a chin, he has determination and a great team behind him.

“Jake does well defensively, remember he’s tall and long, you’re not going to let yourself get hammered; pop your jab, use your distance.

“Jake did a lot of work with his footwork to get him out of dangerous positions.”

Paul is 3-0 all by knockout with wins over YouTuber ‘AnEsonGib’, ex-NBA star Nate Robinson, 37, and retired UFC welterweight Ben Askren, 37.

And he returns to the ring against ex-UFC champion Tyron Woodley, 39, on August 29 in his fourth and most challenging fight to date.

Facing a second consecutive MMA fighter has meant drafting in the likes of Taylor for sparring.

But not only is Paul sharing rounds with experienced MMA campaigners, but also ‘unbeaten’ boxers who are supposedly left stunned by the social media sensation.

Taylor, 32, revealed: “BJ likes Jake to spar with the best of the best, he’s bringing in boxers who are undefeated.

“Jake’s just not fighting MMA fighters and beating them up. He’s fighting real boxers and he’s giving them a hard time.

“Because a lot of boxers come in here the first day and say, ‘He ain’t no fighter’ and then they spar him and then they say, ‘I didn’t know he was that good’.”

Advertisement. Scroll to continue reading.
In this article:boxingstyle, inthering, jakepaul