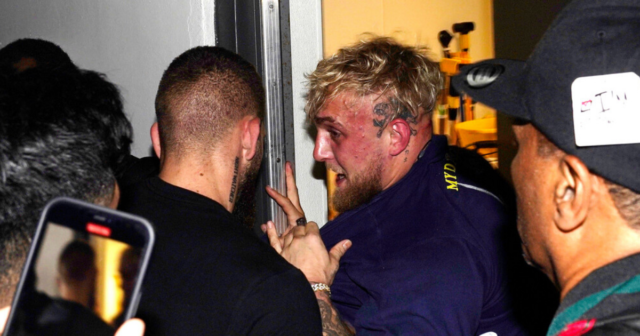 JAKE PAUL has claimed Floyd Mayweather tried to get him ‘killed behind the scenes’ by ‘gangsters’ after their ‘gotcha hat’ brawl.

Paul in May stole the boxing legend’s cap sparking a mass brawl which also involved his brother Logan, who was due to face Mayweather a month later.

Mayweather was left irate after the prank and was captured yelling ‘I’ll kill that motherf***er’ in backstage footage.

And according to Paul, his life was allegedly in danger following the stunt with his security team warned of an attack.

He said on the Full Send podcast: “He was trying to get me killed behind the scenes for sure.

“He was calling like the gangsters cause we were in Miami here at the time.

“And they were like, ‘Yo, you guys gotta be f***ing careful, he’s trying to do something’.”

But Jake’s viral video nabbing the cap and boasting ‘gotcha hat’ remains one of the most talked about moments of the rivalry.

And he believes it riled Mayweather up like never before seen.

“And we’re like genuinely making this old guy look really stupid and we legitimately hurt his feelings.

“That’s what happened, that’s why he was so angry – we hurt his feelings, his hair was all f***ed up and we were just making him look stupid in general.

“And no one’s ever really gone there and really hurt his feelings.”

Mayweather has not responded to the allegations of plotting revenge against Paul, but at the time Logan publicly admitted fears for their safety.

He told TMZ Sports: “Floyd’s threatened to kill my brother.

“So we’re taking security precautions. [We have security] everywhere at all times, it’s more than usual.

“When you have a guy with the resources and the wealth that Floyd Mayweather has, and the connection and the network.

Advertisement. Scroll to continue reading.
In this article:behindthescenes, floydmayweather, jakepaul