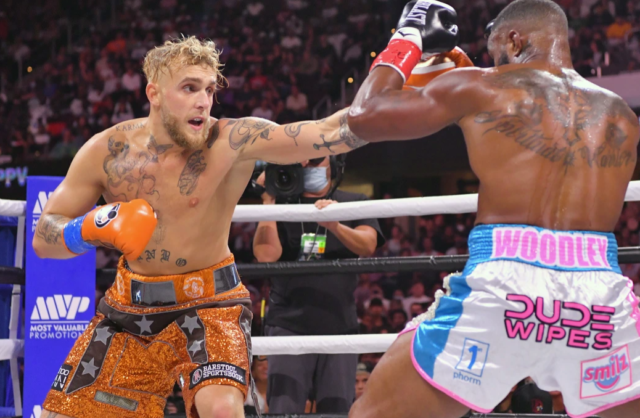 The YouTube star sealed a surprise win on points after an eight-round slugfest with the martial arts ace who won a UFC championship three years ago.

And the Mirror reports the social media star took to Instagram to pat himself on the back for boosting his bank balance following his victory.

In a post to his 17million followers on the platform, Paul reportedly wrote: “When you get 10 per cent closer to becoming a billionaire.”

However despite claims, the clash was the second-biggest selling pay-per-view of the year behind his brother Logan’s duel with Floyd Mayweather, reports suggest Paul could pull in far less than a nine-figure amount.

And Sportingfree.com reckons the YouTube presenter could earn around £1.4m ($2m) from the clash including its pay-per-view income.

However, the boxing-obsessed social media star has reportedly invested in a sports industry venture capital business which could be the basis for his earnings boast.

And Paul has been lobbying for higher earnings for boxers during his stint in the sport.

The YouTuber told Showtime Sports: “A lot of young fighters get sucked into long fight contracts by promoters and then they become a star and the promoters take all their money.

“I want to help fix that problem. I think we need to attack it in multiple ways.

“First, we need the sports to become more popular. More fans, more audience which will naturally put more revenue across the board. I think also voicing it.

Paul, 24, who has reinvented himself as a prizefighter, has been challenged to a future professional boxing bout by UFC hero Michael Bisping.

And the MMA legend reckons taking on the popular YouTube star in the ring would be the ‘easiest sparring session’.

Paul landed a three-punch combination on Woodley in the opening round of the bout in his US hometown of Cleveland, Ohio.

This followed a testing second round which saw the social media star at times on the back foot.

Paul then took the fight to Woodley landing a right uppercut before the UFC specialist connected with a big right hand.

And that punishing blow saw the vlogger stagger into ropes

Both fighters appeared to be tiring by the sixth round with Paul ending the round with a hand over the top.

And following the announcement of a split decision the YouTuber was declared the winner picking up his fourth pro boxing victory to date.