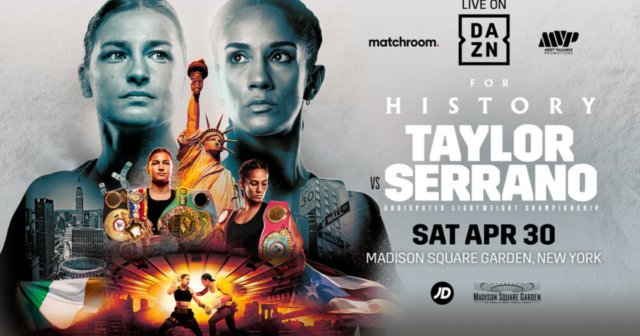 KATIE TAYLOR will face Amanda Serrano in the ‘biggest women’s boxing fight in history’ on April 30 at Madison Square Garden.

The undefeated Irish star, 35, will put her 20-match undefeated record as well as the undisputed lightweight title on the line against the Puerto Rican.

Matchroom promoter Eddie Hearn described it as the ‘greatest thing to happen to women’s boxing’ as Jake Paul also announced the big news on Twitter.

The two fighters were due to meet back in 2020 until the Covid-19 pandemic forced the bout to be called off.

Serrana is promoted by Jake Paul’s Most Valuable Promotions, and the YouTuber tweeted the official fight poster along with: “Biggest women’s fight in boxing history. We did it @Serranosisters  @MostVpromotions.

Taylor said: “This is a fight I’ve wanted for a long, long time and I’m just excited for it to finally take place because these are the kind of fights I’m in the sport for.

“People have been talking about this fight for years and there have been times I wondered if it was ever going to happen so I’m very grateful to Eddie Hearn, everyone at Matchroom, DAZN and Madison Square Garden for getting it over the line.

“When I turned professional my goal was to be involved in huge events like this so to headline at Madison Square Garden in a fight of this magnitude is really the pinnacle of the sport.

“It’s such an iconic venue and has been home to so many of the historic moments in boxing and I truly believe this will be another one.”

“We’ve been working hard for a long time on women’s boxing and I’m just so happy that fight is made and at the mecca of boxing, Madison Square Garden.

“They deserve everything they get. Two trailblazers. One undisputed champion, one seven-division champion – it’s going to be a massive event.”