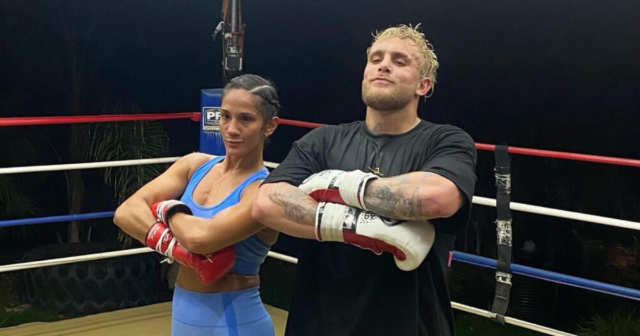 Seven-weight world champion Serrano, 33, fought on the same bill as Paul when the YouTuber made his debut against AnEsOnGib in January 2020.

And the Puerto Rican superstar was then on the undercard of Paul’s headline bout with Tyron Woodley back in August.

Following that event, which saw both fighters pick up victories, Serrano signed with Paul’s new Most Valuable Promotions.

And they are now hoping to make a super-fight with undisputed lightweight champion Katie Taylor.

The 35-year-old Olympic gold medallist, who has won all 19 of her professional fights, looked set to face Serrano in May of last year before coronavirus restrictions scuppered the financial structure of the deal.

Since then they have been unable to make the fight, but Taylor’s promoter Hearn now believes Paul is keen to be a part of history by helping Serrano secure the huge clash.

Both women are fighting at the end of 2021 and, providing they come through unscathed, a huge mega-fight looks to be on the cards.

Speaking to The Mirror, Hearn said: “We’ve been speaking with Most Valuable Promotions and we want to do it here in New York.

“Katie and Serrano fight in December, so I’m looking for the end of April for that fight, or something like that.

“Jake is still the mind behind the operation. I think Jake has taken a liking of respect to Amanda Serrano, he’s given her a great platform and pushed her profile considerably.

“And he wants to be the guy that makes the biggest fight of all time in women’s boxing.

“It’s partly because he likes Amanda, and partly as an ego trip where he can turn around and get a huge payday for Amanda, give her the biggest fight of all time and say ‘I did that’.”

Last month, Paul tweeted that the fight between Serrano and Taylor was “on its way to being completed”.

Serrano, who has won 41 of her 43 fights and not been beaten since 2012, takes on Miriam Gutierrez on December 18 – someone Taylor beat by unanimous decision last year.

That fight will take place in Florida on the undercard of Paul’s grudge match with Tommy Fury.

Seven days earlier, Taylor will defend her four lightweight belts in Liverpool when she takes on Kazakh fighter Firuza Sharipova.