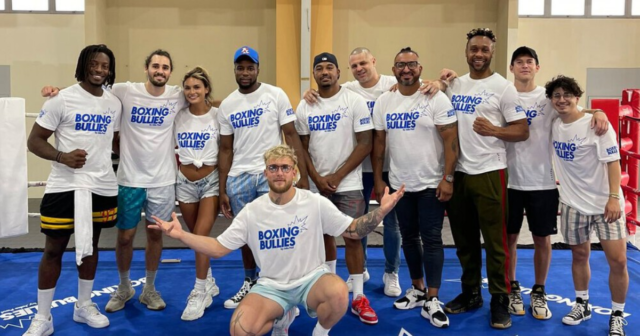 JAKE PAUL has launched a children’s charity to start ‘fighting back’ against bullying and vowed to ‘share this beautiful sport’.

The YouTuber revealed ‘Boxing Bullies’, his Non-Profit Foundation, online and kickstarted his work in Puerto Rico.

“Today we talked about our initiative to fight back against bullying, put the kids through a 50 minute tough boxing workout, sponsored 15 amateur fights, and gave away over 100 pairs of gloves.

“Boxing has helped me learn so much about myself and realize what’s important in life.

“I want to share this beautiful sport with as many kids as possible.

“Our mission is to instill confidence, leadership, and courage in the youth through the sport of Boxing and to get Boxing gloves into to as many kids hands as possible across the world, while fighting back against the ever increasing problem of bullying and cyber bullying in our generation.”

But since then, he has turned professional and currently has a record of 3-0, all by knockout.

But has so far beaten only limited opposition since his January 2020 debut.

But he will be tested like never before against Woodley, who reigned the UFC welterweight division from 2016-2018 but is without a win in three years.