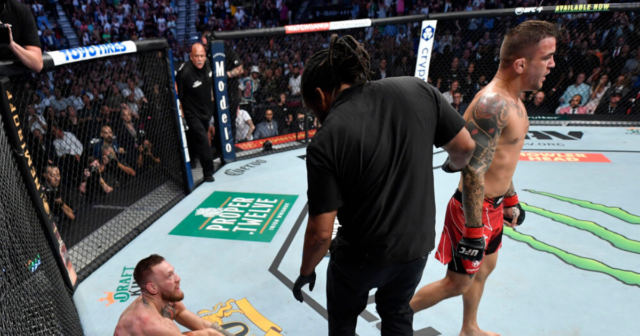 JAKE PAUL mocked Conor McGregor while rubbing his $100,000 necklace of the Irishman, who broke his shin against Dustin Poirier.

McGregor was knocked out by Poirier in January – seven years after his own win – and the pair renewed their rivalry for a series decider.

YouTuber Paul was cageside as he continues to push for a mega-money boxing match against the Irish superstar.

And the trilogy bout ended in disaster for McGregor as he suffered a broken shin at the end of round one against Poirier.

It forced the doctor to stop the fight, with Paul rubbing the defeat in afterwards.

He said: “Goodnight buddy.” He then zoomed into the diamond chain of a knocked out McGregor.”

After a frantic first round in Las Vegas, it ended in chaos as McGregor stood on his ankle leaving the doctor no choice but to stop the fight.

The former two-weight champion insisted their rivalry is ‘not over’ as the pair were STILL trading words post-fight.

“Usual s***e, dive to close the distance. This is not over. I have to take this outside with him, it’s all outside.”

Before the fight, McGregor boasted how he had Poirier’s wife, Jolie, messaging him on Instagram.

And as the bad blood spilled over, again he looked to goad Poirier.

McGregor said: Your wife is in my DM’s. Hey baby, hit me back up and I’ll chat to you later on.

“We’ll be having an afterparty at the Wynn nightclub baby.”

McGregor – who promised Poirier would be leaving on a stretcher – was the one assisted out of the T-Mobile Arena.

But he left adamant on keeping the chapter open, meaning a FOURTH fight between himself and Poirier cannot be ruled out if he makes a recovery.

Advertisement. Scroll to continue reading.
In this article:conormcgregor, dustinpoirier, win