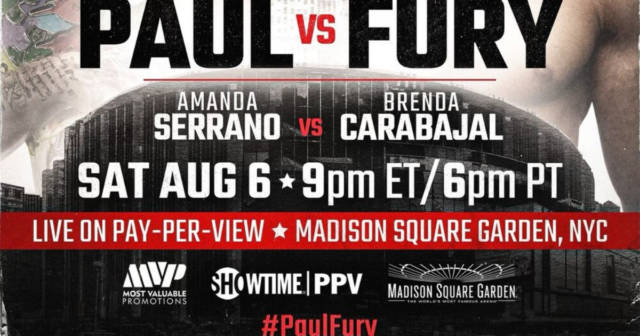 JAKE PAUL has revealed he’s willing to fight Tommy Fury in the UK – but only after he graces the ring at Madison Square Garden.

The pair’s MSG melee fell through for a second time earlier this week when Fury failed to make Paul’s deadline to guarantee he’d be granted entry to the USA.

Love Island hunk Fury was devastated to have been forced out of his grudge match with Paul for a second time but is confident they’ll one day share the ring.

And YouTuber turned boxer Paul is willing to enter enemy territory to finally settle the score with the Brit.

He said: “I’m confident you are a scared little boy who doesn’t want to fight or understand business. I will pay you $500K to fight me in the UK.

“I will do it shortly after August 6. You accept?”

Team Paul terminated their contract with Fury on Wednesday over the Brit’s reported failure to make a serious attempt to rectify his immigration issue with the United States embassy.

The social media star said in a statement: “Fury’s received a termination notice.

“MVP did everything it could 2 help him & team. He wasn’t interested & he literally went into hiding.

“2nd time in a row he has pulled out.

Paul and Fury’s clash was thrown into major doubt late last month when Homeland Security prevented the latter from boarding a flight to America.

The incident occurred just days after brother Tyson was prevented from entering the country due to his “involvement” with alleged Irish mob boss Daniel Kinahan.

Following the termination of his contract to face Paul, Fury said:”I’m gutted and disappointed in regards to issues I have faced with entry to the USA.

“This situation has been left with my lawyers as being denied entry to a country is obviously a very serious issue and needs to be resolved.

“I am confident this fight will happen when the issues get resolved.

“I want to clarify that I will fight in a neutral country that both parties can enter.

“This can be any time, any place, anywhere.”

SunSport understands Paul is on the brink of announcing a new opponent for August.

Hasim Rahman Jr – the son of former heavyweight champion Hasim Sr – is understood to be the frontrunner to face The Problem Child.

Advertisement. Scroll to continue reading.
In this article:jakepaul, theuk, tommyfury