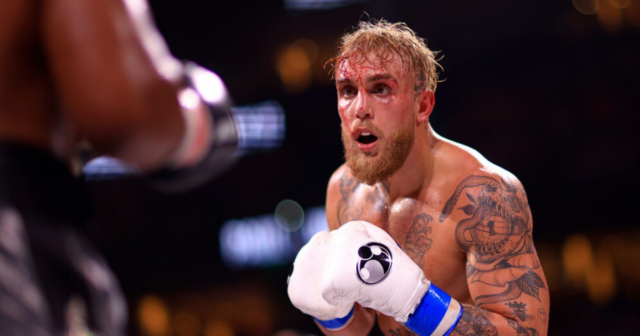 JAKE PAUL has taken aim at Floyd Mayweather once more after revealing his goals for 2022.

And while there were no judges on hand to score the contest, it was widely acknowledged that the 50-0 legend comfortably won the eight-round bout.

Now Logan’s brother Jake has taken the opportunity to fire back at Mayweather – six months after the pair became embroiled in a press conference altercation when the internet sensation stole the boxer’s hat.

Speaking on Twitter, Jake said: “Some people are asking about my 2022 goals. Here they are.

“1. Buy Mayweather Promotions and save them from bankruptcy. 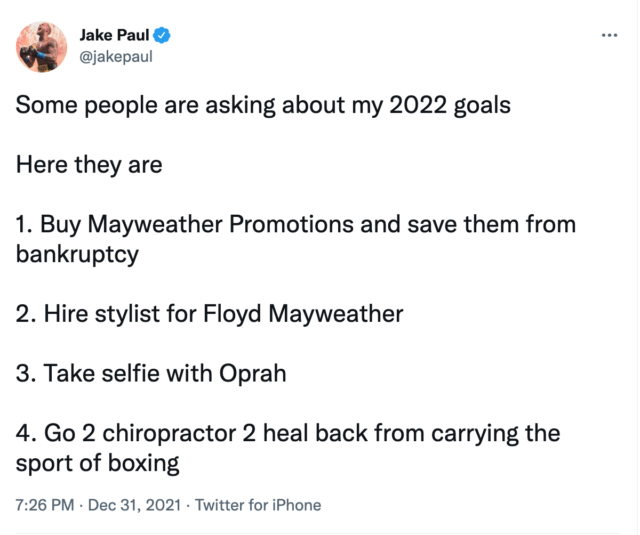 Paul mocked Mayweather in two of his four goals for 2022

“4. Go 2 chiropractor 2 heal back from carrying the sport of boxing.”

Paul ended the year with a sensational knockout of Woodley as he put to bed the closeness of their first fight – which he won by split decision.

And the sixth round KO was enough to earn him the ESPN Knockout of the Year award – although some boxing fans were furious at Paul being given the accolade.

There have also been accusations that the pay-per-view numbers for the Woodley rematch were poor.

But last week Paul hit back at those claims with a rant on social media.

He said: “The PPV number rumours are bulls***. First fight with Woodley we sold 500k+.

“Numbers for this one [the rematch] are still rolling in but still looking positive.

Not my best business night. But remember.. everyone wanted to see me vs Fury and that’s what we sold.

“Shoutout to Showtime for riding with me and all the fighters on the card and Tyron for not being a b***h like most of these ‘fighters’ are..”

Advertisement. Scroll to continue reading.
In this article:benaskren, jakepaul, tyronwoodley