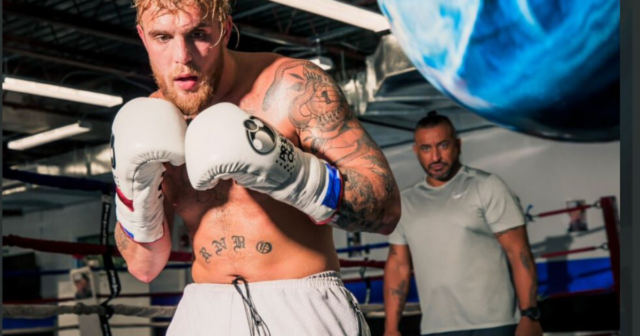 JAKE PAUL has claimed Tommy Fury will have to return girlfriend Molly Mae’s Christmas presents after he pulled out of a highly-anticipated showdown.

The British star, 22, revealed yesterday that he is suffering with a bacterial chest infection AND a broken rib.

That means his mega showdown with YouTuber Paul – scheduled for December 18 in Tampa, Florida – is off.

The Problem Child blasted on Twitter: “It is official, Tommy Fury is boxing’s biggest b***h.

“I couldn’t believe the news at first, it still doesn’t even seem real. He fumbled the biggest bag of his life.

“Now he will be watching at home, paying me $60 instead of getting paid millions of dollars to fight me.

He has now continued taking shots at the younger brother of WBC heavyweight champion Tyson Fury by bringing his girlfriend into the equation again.

The 24-year-old told talkSPORT: “I was upset. A lot of stuff had been said and I wanted to knock him out. I wanted to make him bleed and eat the canvas.

“That is the most satisfying part when your opponent has a lot to say and you just knock them out and embarrass them in front of the whole world.

“I’m a little bit p****d off I’m not able to do that. The kid is scared. The kid cracked under pressure.

“He’s going to have to return all the Christmas presents he got Molly as he has no way of paying for them.”

Fury still plans to fight, and beat, his American rival in 2022 – but Paul has cast doubt on that.

He said: “The door is closing (for Tommy Fury). He’s not reliable. He didn’t show up to the first press conference. He’s faking these injuries or whatever they are.

“It’s upsetting. So if he’s doing that now, then what is stopping him from doing it next year.

“For me, in a cynical way, I just want to leave him in the dust and never give him this opportunity again.”

Paul will instead fight Tyron Woodley in a rematch of their August bout.

The ex-UFC star is already in training and was offered an extra £377,000 if he secures a revenge knockout.

Paul added: “The show must go on. This is business and these types of things happen in boxing and I just told my team I will fight anybody, whoever it is.

“Tyron Woodley was down, he’d been training for a fight in January and he has balls for getting in there and stepping in.

“It’s going to be exciting, almost a more exciting fight than Tommy Fury because Tyron is harder. He’s more experienced and wants to get that knockout.”