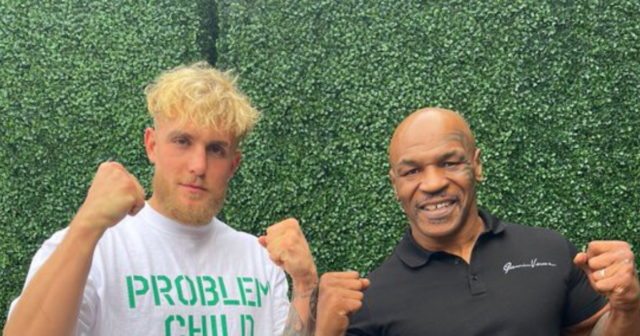 JAKE PAUL has revealed his plan to fight Conor McGregor, but claims the UFC legend is ‘already ducking me’.

The 24-year-old YouTuber has been calling out the Irishman for more than a year as he looks to land a bout with the former two-weight MMA world champion.

And, while speaking to ex-heavyweight champion Mike Tyson, Paul insisted he will take on McGregor after five more fights.

In a video of the two on Instagram, Paul told Tyson: “I’m going to fight McGregor in five fights.

“We talked about it, I’m going to fight McGregor for sure.”

The 5-0 professional boxer then went on to claim that the 33-year-old UFC star is avoiding a fight with him.

“He’s already ducking me,” Paul explained to Tyson in the clip posted to social media.

“I’m going to beat McGregor. Just like you said, five fights from now, what’s up?”

But a fight against McGregor promises to attract a heap more attention than what he has already received.

And the American explained back in November how the bout will take place within the next two years.

Meanwhile, McGregor is currently on the comeback trail as he continues to recovery from the broken leg he suffered against Dustin Poirier in July.

The Irishman has lost his last two fights to Poirier – by second round KO and doctor’s stoppage.

UFC boss Dana White is eyeing a summer return for McGregor if his rehabilitation goes according to plan.

White told ESPN: “If everything goes right with the healing of his leg, he’ll be back this summer.

“I don’t know [if he could fight for the title right away when he comes back]. I won’t know the answer until it gets closer.”

Advertisement. Scroll to continue reading.
In this article:conormcgregor, jakepaul, ufclegend