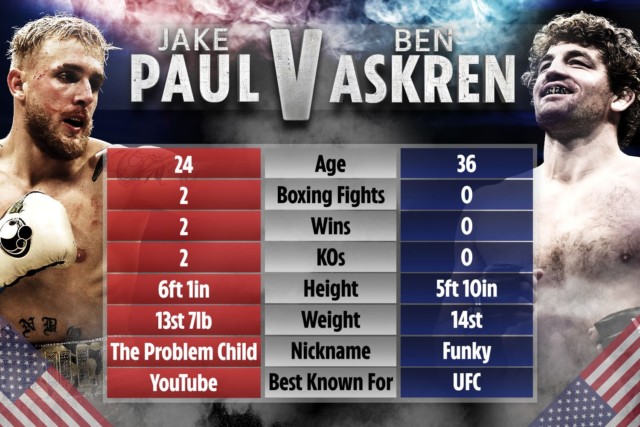 JAKE PAUL returns to the ring this weekend for what should be the toughest fight of his career.

How the fighters compare ahead of this weekend’s bout

When is Jake Paul vs Ben Askren?

The undercard begins at 2am UK time, with the main event at around 5am UK time through the night into Sunday morning.

What live stream and TV channel is Jake Paul vs Ben Askren on?

Jake Paul vs Ben Askren will be broadcast live on Fite.TV and the Triller app.

Former UFC heavyweight champion Frank Mir makes his boxing debut against ex-boxing star Steve Cunningham in what should be an intriguing clash.

Odds via Paddy Power correct at time of publication

Jake Paul: “You f****d up, Ben by taking this fight. April 17, I promised my team, my family, my brother who is there right next to you right now, I promise to make you go down as history as the world’s worst UFC fighter.

Ben Askren: “We haven’t seen anything.