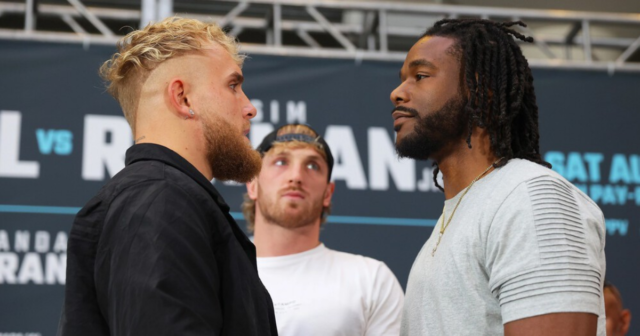 JAKE PAUL says that the New York State Athletic Commission refused to let him fight a host of big-name MMA stars as a replacement for Tommy Fury.

The unbeaten YouTuber will face Hasim Rahman Sr, son of boxing icon Rahman Sr, on August 6 at Madison Square Garden after his bout with the Brit was cancelled.

The 5-0 Paul, 25, has competed in the states of Florida, Cleveland and Georgia on his previous three outings, all of which have more lenient commissions than the likes of New York or California.

The Problem Child brutalised basketballer Nate Robinson in his second pro fight – leading to more scrutiny on novice fighters competing in the ring.

And as he looked to fill the void left by Fury, he stated that there were several MMA stars that he was not able to face before his clash with the 12-1 heavyweight pro boxer was confirmed.

Speaking to Morning Kombat about the Athletic Commission’s involvement in choosing his new opponent, he said: “They drove it a lot.

“There were certain names that they wouldn’t approve, mostly MMA fighters. Then we were like ‘alright we need a professional boxer’.

“But it sort of reversed because they were like ‘we don’t know if we’re going to approve Jake for this’.

“They were just like everyone, this is a high-risk fight. This is insane, this is psychotic, no boxer is taking chances like this as early on in their career.”

Meanwhile, Rahman has accused Paul of being “SCARED” to fight him at heavyweight after inserting a rehydration clause in their contract.

Rahman signed to fight Paul on a month’s notice at the 200lb cruiserweight limit of 14st 4lb.

The son of ex-heavyweight champion Hasim Sr is not restricted to what weight he enters the ring at, but slammed the fight clause.

Rahman, 31, told SunSport: “Jake’s scared, if not he would have fought me at heavyweight. Especially with it being at late notice.

“He wouldn’t have tried to drain me down to 200lb and cheat me under 210lb. That’s what they tried to do.

“Then they shoot me a contract and say, ‘Here, it’s take-it-or-leave it. If you don’t take it, you’ll never, ever, get an opportunity to fight Jake Paul again’.

“Every boxer on the planet wants to fight Jake Paul. Everyone wants to beat this dude up. So, of course I took it.”

In this article:jakepaul, lethim, newyork