Jermall and Jermell Charlo, the incredible story of identical twins who are both boxing world champions
Advertisement 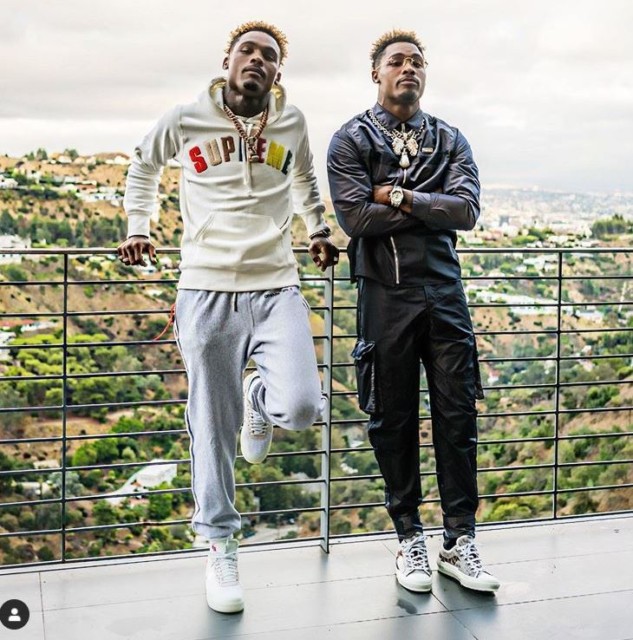 TWINS Jermall and Jermell Charlo are taking the boxing world by storm, dominating the middleweight and junior middleweight divisions.

Hailing from Houston, Texas, the duo set out aiming to stand together atop of the 154-pound division – a feat they are close to achieving at the age of 30.

The Charlo twins were born in Lafayette, Louisiana, but were raised in Houston.

Jermell, the younger of the two, was born one minute after his older brother Jermall.

As teens the brothers attended Alief Hastings High School in Houston and competed in football and basketball, but eventually gravitated towards boxing.

The twins began boxing when their father, former professional Kevin Charlo, took them to the gym to give them a positive, disciplined environment. 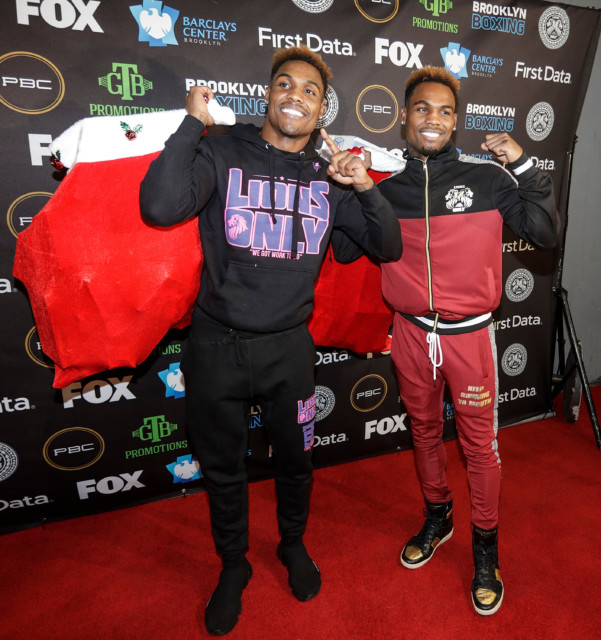 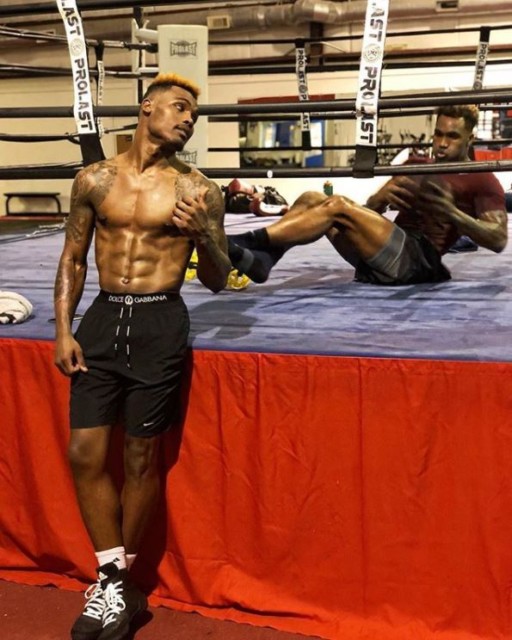 Jermell (front) is the youngest of the two, born one minute after his older brother Jermall (back)

In an interview with ShowTime, local trainer Ronnie Shields said he used to see the young twins in the gym constantly.

“I would train Evander Holyfield in Houston and I used to see Jermall and his brother Jarmell in the gym every day and every single day they would say ‘you’re going to train us or what man?’” Shields said.

Along with Holyfield, Shields worked with greats such as Mike Tyson and Pernell Whitaker.

Jermell quickly rose through the amateur ranks, winning a bronze medal at the 2005 Junior Olympics at the age of 15.

After posting an amateur record of 56 wins and eight losses, Jermell turned professional at the age of 17 in 2007.

As his younger brother turned pro, Jermall continued as an amateur hoping to compete in the 2008 Olympics.

Although a toe injury kept him from that dream, he wrapped up his amateur career in 2008 with a record of 65 wins and six losses.

Jermell began his professional career with a four-round unanimous decision victory over the previously unbeaten Corey Sommerville, whom he floored in the third round on December 8, 2007.

The youngest Charlo continued his impressive start, and in 2009 he knocked out the previously unbeaten Abdon Alonzo in the second round, making his record 10-0 with five knockouts.

That was followed by a unanimous decision win over Demetrius Hopkins, nephew of Bernard Hopkins, in June. 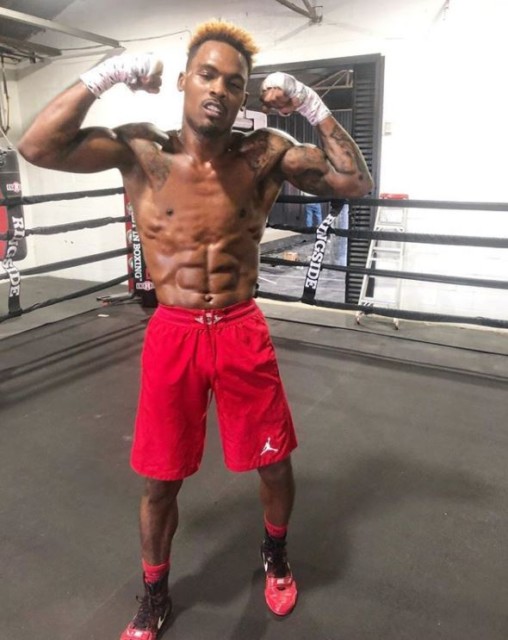 Jermell began his professional career on December 8, 2007, after picking up a knock out win over Corey Sommerville

“Yorgey was a major move in my career. He was 25-1.” Jermell told Premier Boxing, reflecting on the win.

“Then you have Demetrius Hopkin and I had to have surgery before the fight because the commission said that my vision was so bad that I was legally blind.”

On May 21, 2016, the twins made history at the Cosmopolitan of Las Vegas when both Jermell and Jermall walked away with championship belts around their waste. 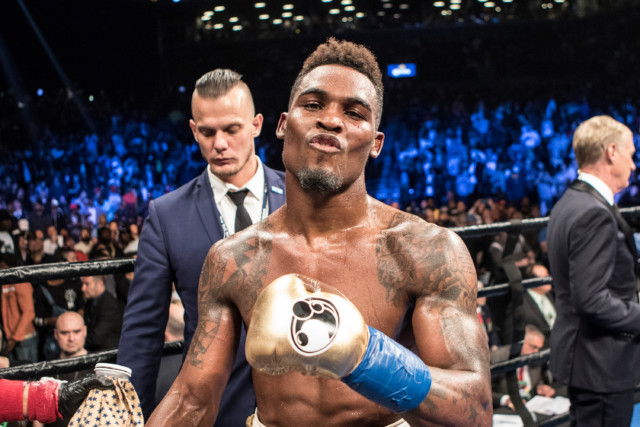 The siblings became the first twins to reign concurrently in the same division at the same time.

“We did it,” Jermell said after the wins.

“We made history. We’ve been boxing for all these years, and it had to happen.”

Jermall added: “It was great being the first twins to win titles in the same division, and I’m so proud of my brother. I knew he could get the job done.”

On December 22, 2018, in the Barclays Center in Brooklyn, New York, Jermell lost his title to Tony Harrison by unanimous decision. 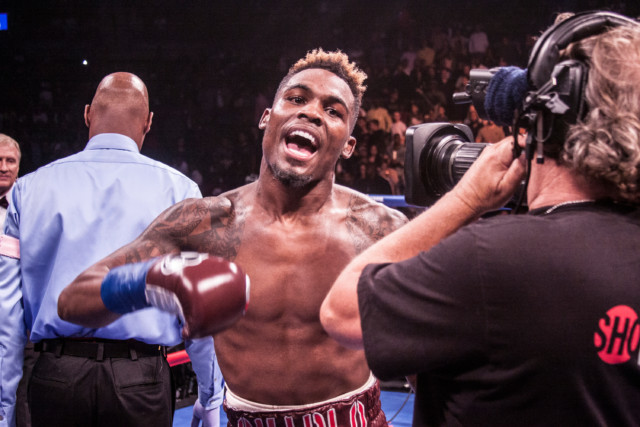 In May 2016, Jermell won the WBC’s vacant 154-pound title after an eighth-round stoppage against John Jackson

“They took that fight from me,” Jermell said of the judges.

“I was pressing the action. He didn’t win that fight. I’m going to get my belts back.”

Jermell kept his word when on December 21, 2019, he knocked Harrison down four times until the referee finally called the bout in the 11th round.

“I got that belt. It took me a while, and got in the 11th and I didn’t leave it up to the judges,” Jermell said afterwards. “I dictated, I dominated and I knocked him out.”

One year after his younger brother went professional, Jermall had his first professional fight on September 12, 2009, with a second-round KO of Cimarron Davis.

Despite competing in his brothers shadow, Jermall went 12-0 with eight KO’s.

The older twin got his moment in April 2013 when he faced Mexican veteran Orlando Lora at the Alamodome in Texas on the undercard of the Austin Trout and Saul Canelo Alvarez pay-per-view. 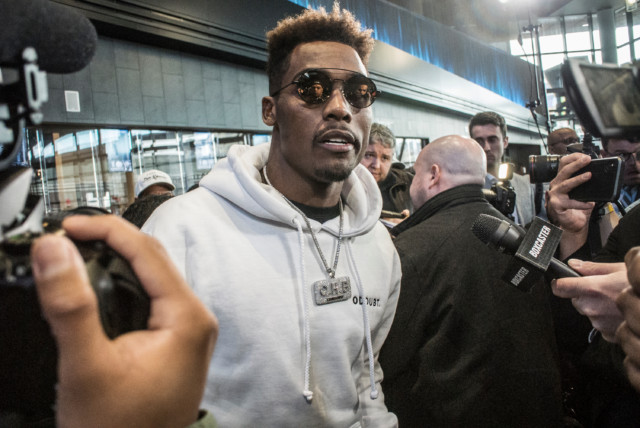 Jermall made his professional boxing debut on September 12, 2009

The veteran was no match for Jermall, who controlled the match and gained a fifth-round stoppage victory.

Under trainer Ronnie Shields, Jermall rode the momentum fighting four times in 2013, and winning all four.

He climbed to a 17-0 record, putting himself in position for a title shot.

On September 12, 2015, Jermall finally got his shot at the 154-pound title, going up against the champion Cornelius Bundrage.

Exactly seven years to the day he made his pro debut, Jermall picked up a third-round TKO over Bundrage to be crowned the champion.

Jermall’s second defense was a 12-round unanimous decision win over former champ Austin Trout on May 21, 2016, followed by a fifth-round KO over previously unbeaten Julian Williams in December of that year. 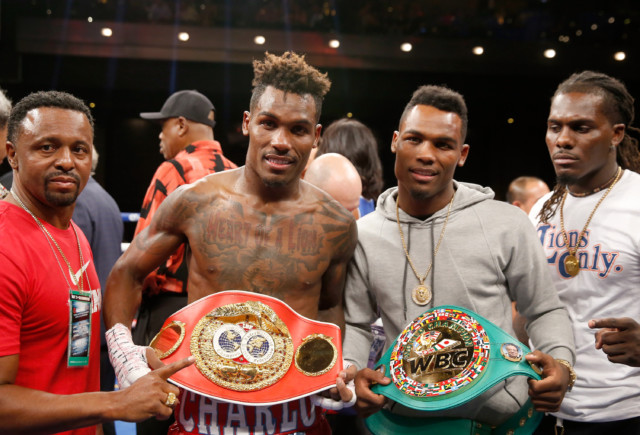 Jermall (L) announced his move to the middleweight division in 2017 and called out Gennady Golovkin, Daniel Jacobs and Canelo Alvarez

“I told everyone what I was going to do since the fight was announced. Williams just wasn’t on my level,” Jermall said after the win.

“I’m outing my life on the line again for my family to continue building my legacy as one of the best boxers in the world.”

In 2017, Jermall proclaimed his move up to the middleweight division and announced himself as an immediate threat to Gennady Golovkin, ex-champion Danny Jacobs and Canelo Alvarez.

He continued to display his incredible knock out power when he picked up a KO victory over top-ranked challenger Dennis Hogan in late 2019. 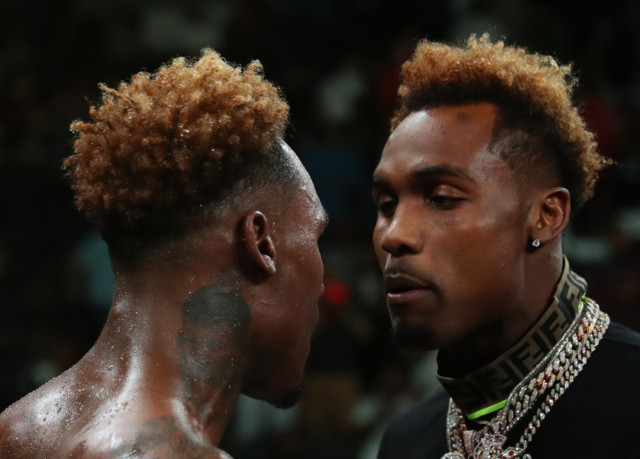 Jermall dropped him in the fourth round and then proceeded to batter him until a left hook in the seventh floored Hogan again, resulting in the referee calling the bout.

Jermall is married with four sons while Jermell is a single father with a son.

Jermell’s son, Elijah, was born on August 22, 2009, during the early stages of his boxing career.

Soon after his victory over Vito Gasparyan in 2009, Jermell spoke about the birth. 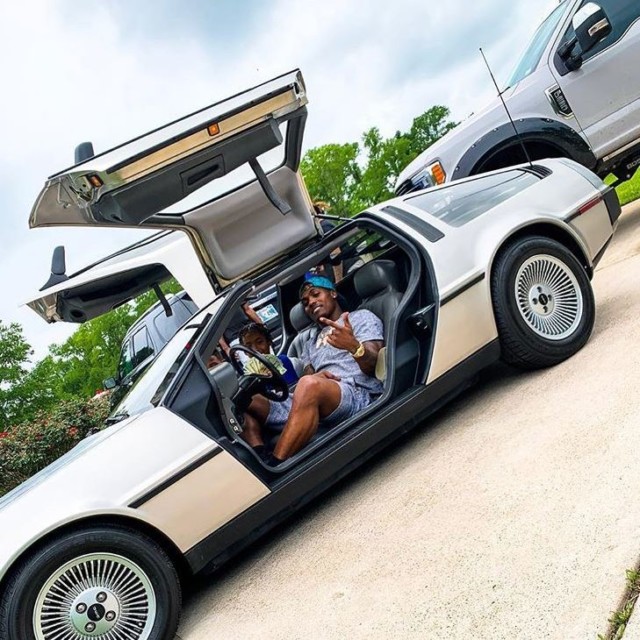 Jermell’s son, Elijah, was born a two years after his professional debut on August 22, 2009

“My father cut the umbilical cord for my son, because I wasn’t actually there. So he was born, then, I went and won the fight. That was a situation where there could have been a lot of adversity.”

ESPN reported in 2018 that Jermell was the defendant in a domestic violence case. He had been arrested in May 2018, after an alleged attack on a women whom he had been dating.

On June 19, 2018, a grand jury indicted Jermell on one count of third-degree felony assault toward a member of his household. 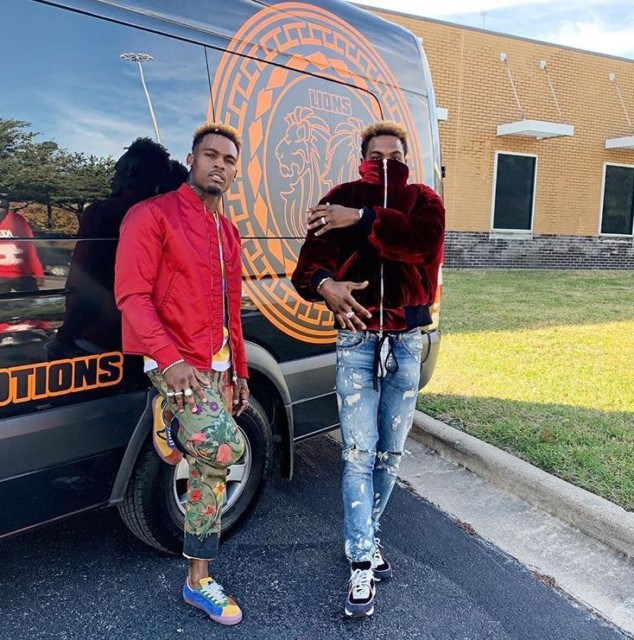 According to the grand jury indictment, Jermell allegedly squeezed Jazmyne Olison’s neck and forced her against a fence, floor and railing. He also allegedly pulled her hair.

“Charlo committed the said offense by intentionally, knowingly, and recklessly impeding (Olison’s) normal breathing and circulation of blood by applying pressure to her throat and neck and by blocking her nose and mouth,” the indictment read.

On March 2019, a grand jury acquitted Jermell on all charges related to the alleged attack after the three-day trail produced no evidence that matched the claims of assault. 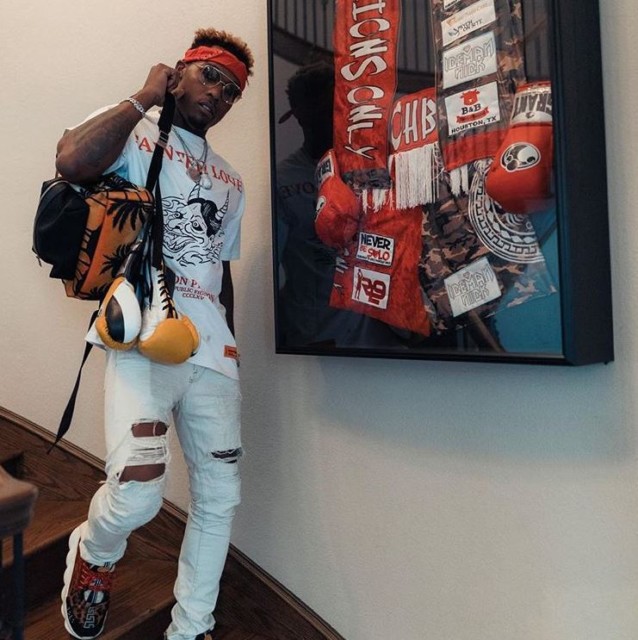 Jermell remained silent throughout the trail, but spoke out after on his decision to not take a plea deal.

“This case, and the fear of losing my freedom and livelihood, has hung over me like a dark cloud for almost a year,” he told the Los Angeles Times.

“I was offered a plea deal that I could not in good conscience accept because I wasn’t guilty. I’m happy that the jury did its job, and I want to thank them for that.” 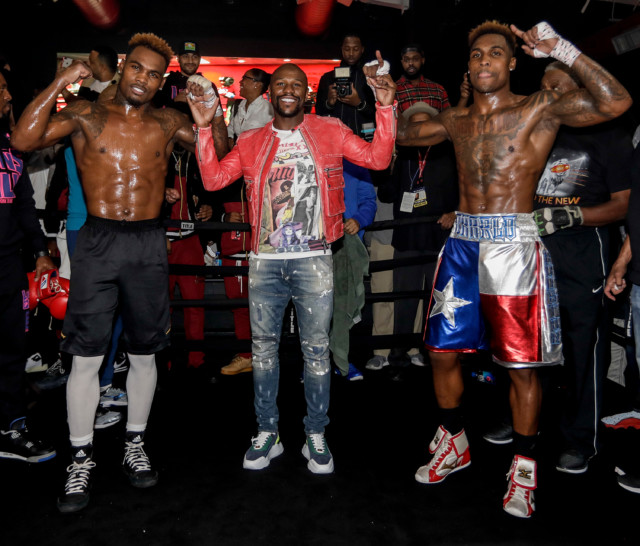 Jermall will defend his WBC middleweight title against Sergiy Derevyanchenko on September 26.

It will be the brothers’ first fight since their December 2019 victories over Dennis Hogan and Tony Harrison.

In this article:boxingworld, duoset, theyare, York