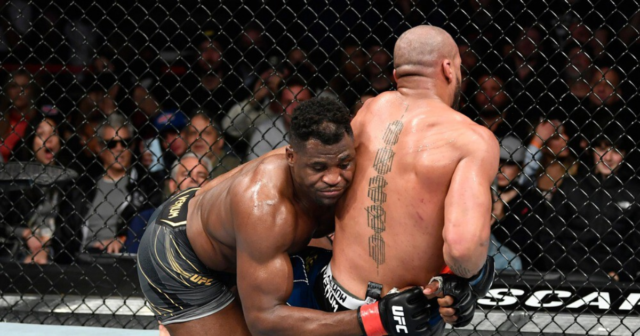 Francis Ngannou during his win over Ciryl Gane

The winner was touted as a potential opponent to welcome back UFC legend Jones, planning to return this year.

But the man himself was less than impressed and hinted at continuing to sit on the sidelines.

The 5-0 boxer has built up a bitter feud with UFC president Dana White recently, accusing him of underpaying his stable.

But figures released after UFC 272 revealed only £1.3million was spent on the whole card.

Paul blasted: “I can’t stress enough how bad this is..

Paul has knocked out and beaten two of White’s former fighters, Ben Askren, 37, and Tyron Woodley, 39.

Ex-UFC champion Woodley initially lost on points in August but was KO’d in their December rematch.

As a result, White has mocked the social media sensation for failing to fight an opponent who has boxed professionally before.

But the UFC boss recently talked down a feud with Paul, telling Manouk Akopyan: “He really hasn’t been a thorn in my side.

“I don’t hate the guy like people think I hate him. You know, he’s out there doing his thing.

“He’s a young guy who’s got a fanbase and is trying to make some money. I don’t ever fault anybody for that.”