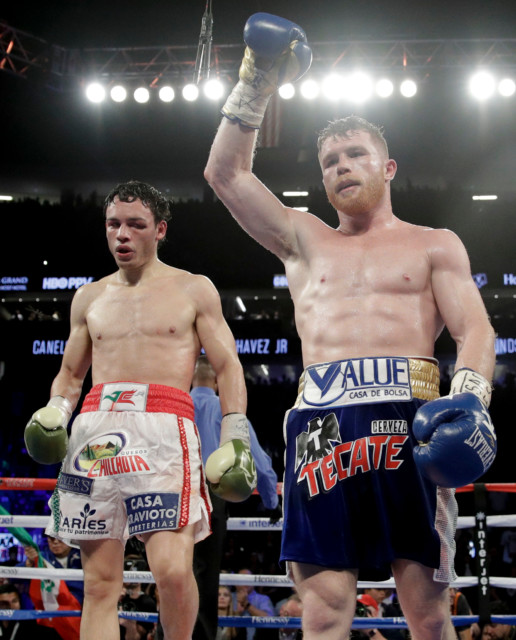 JULIO CESAR CHAVEZ insisted Canelo Alvarez NEVER hurt him in their first fight as he called for a rematch.

The heated rivals put Mexican bragging right on the line in 2017 but Canelo eased to a points win over 12 rounds.

The current pound-for-pound dominated Chavez Jr, who was left with a severely swollen left eye.

But the son of a legend has maintained Canelo was not near a knockout as he dismissed the four-division champion’s power.

Chavez Jr, 35,”He didn’t hurt me. He’s not a big natural puncher. I felt his punch but not to hurt me.

“I just want to tell the people of Sinoloa I apologise. Obviously they wanted a war, I couldn’t give it to them tonight. My body just wasn’t able to.”

The feud between the two was so intense they put their entire purses on the line live on Spanish TV.

At the time, Alvarez was the 154lb, light-middleweight champion, pondering a move up to the 160lb middleweight division, where Gennady Golovkin ruled.

Chavez Jr had fought as high as the 175lb light-heavyweight limit, but was forced to come down to a 165lb catchweight with Canelo.

Alvarez has since settled at the 168lb as a super-middleweight, but did win the WBO light-heavyweight title.

Chavez Jr, who returns in a 180lb crossover fight with UFC legend Anderson Silva, 46, this weekend, wants a rematch with Canelo, but at 175lb.

He told TMZ Sports: “I think that I do have the style to win the [Canelo] fight because I attack.

“I try to not give him too much space to move around because he’s a great boxer.

“I just think it’ll be a better fight, but yes, I think I could beat Canelo. I’m thinking I have to get past Silva more than anything first.

“After Silva, I’m thinking one more fight, then I’ll be prepared to face Canelo.”