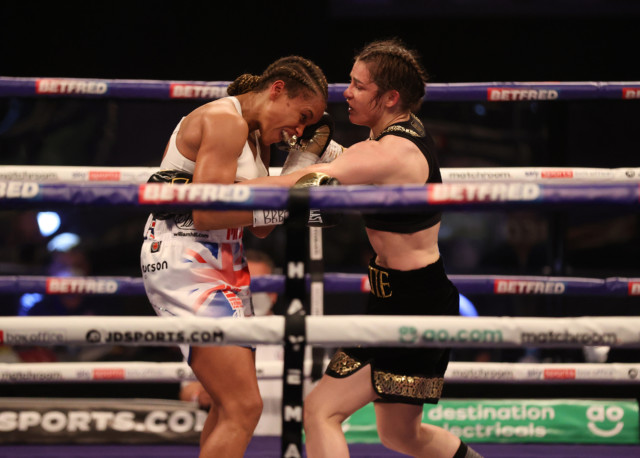 KATIE TAYLOR retained her status as the undisputed lightweight queen with a magnificent win over dream rival Natasha Jonas.

The Irish icon won their last clash in the quarter-finals of the London 2012 Olympics, before going on to grab the gold.

And she denied the excellent Liverpool heroine a second time with a points win that once again celebrated the unstoppable rise of female fights as the the judges scored the bout 96-94, 96-95 and 96-95.

Jonas, 36 made a bold start, throwing big left hands from her southpaw stance and scoring with a jab.

Taylor fired off a rapid three-punch combination that the Scouser caught on her guard but it might have charmed the judges.

Both women gave great accounts of themselves in the second, Miss Team GB landed a stiff jab and threw her left with mean intentions.

But Taylor’s tornado-like hand speed makes all her shots look sensational, even though Jonas did not seem harmed by any of them.

Jonas thundered some heavy hands into Taylor’s ribs in the third, causing trainer Joe Gallagher to yell, “she doesn’t like it downstairs”.

But Taylor, 34, fired back with almost identical digs and Jonas retreated back to the ropes and tucked up to protect her vital organs.

Both trailblazers landed arrow-like jabs at the start of the fourth but Jonas was wobbled by a right hand and left hook attack.

But Jonas gave as good as she got in every exchange and kept the pressure on the ice-cool two-weight queen.

Jonas’ heavy hands appeared to slow at the halfway point but Taylor’s rasping blows, from both hands, remained rapid.

Round six was spectacular as Jonas’ bludgeroning shots seemed to stun Taylor but she replied with furious rat-a-tat shots in a brilliant clash of styles.

Jonas made a great start to the seventh, bruising Taylor’s body with a straight left and rocking her head back with a bullet of a shot upstairs.

Taylor looked hurt but she was given a breather when Jonas’ coach Gallagher was warned for over-excessive shouting in the silent arena.

In eight Jonas rammed a booming left hook into Taylor’s ripped abs but the amateur legend took the winding and tagged Jonas around her high guard.

Taylor seemed fresher in the ninth and Jonas’ nose was bleeding after one too many precise shots.

The decade-long rivals touched gloves before the final session but got straight back to battering each other.

The super women planted their feet and traded like gladiators but it was the speed of Taylor’s hands that looked most impressive as the bell ended the sensational war.