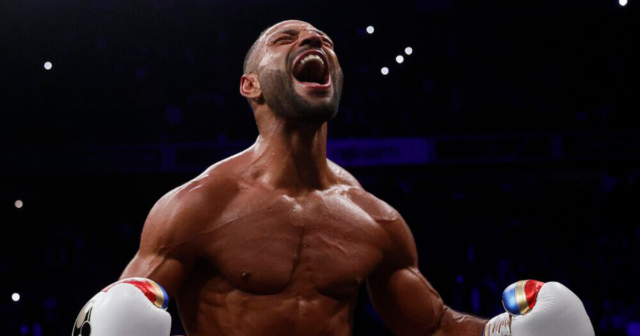 KELL BROOK claimed somebody tried to wake him in the middle of the night ahead of his grudge match with Amir Khan.

The Sheffield boxer destroyed his long-time rival in a dominant performance at the AO Arena in Manchester.

The Sheffield boxer destroyed his long-time rival in Manchester

Brook earned a sixth-round stoppage after referee Victor Loughlin stepped in to stop Khan from taking a battering.

And Brook, 35, showed he wasn’t asleep on the job with his brutal demolition.

It came after he was even forced to change gloves in the ring just minutes before the main event began.

Special K roared: “I always knew it was going to happen. What a feeling.

“I’m back on top now and I’ve got the bragging rights.

“I always knew from when I was 18 that I was a better fighter than him and tonight the fans got to see a mega fight and I dealt with him.

“I even had to put different gloves on in the ring. I was told they weren’t gonna pay me if I didn’t put them on.

“I even had someone knocking on my hotel door at 4aam in the morning trying to upset my preparation.

“They tried to get into my head all week but I took care of business. I can live at peace with myself. I’m back, baby.”

Khan looked beaten, bruised and battered at the end and in truth was only rescued from his own bravery by a compassionate referee.

The former world champ said: “I’m very upset. I just couldn’t get it going. Kell was the best man tonight. Respect to him.”

“I need to sit down with my family but it’s near the end of my career. I may have to call it a day.”

In this article:kellbrook, themiddle, thenight