Kell Brook vs Amir Khan tale of the tape: How Brit boxers compare as long-time rivals finally set to fight in 2021
Advertisement 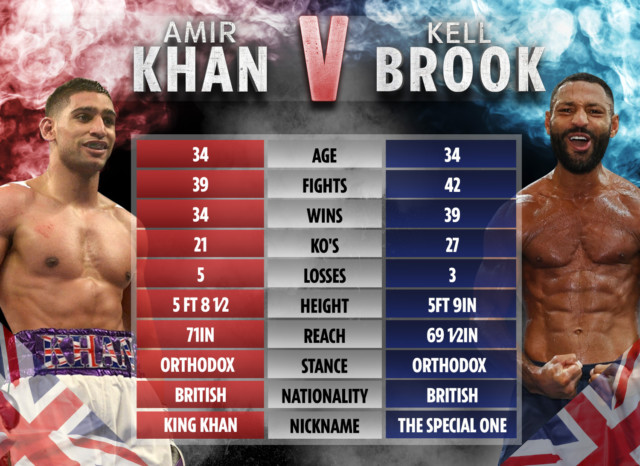 KELL BROOK has accepted Amir Khan’s challenge for the long-time rivals to finally share the ring.

Khan admitted the time is now for the drawn out feud to be settled in the ring – and Brook is similarly on board.

He told talkSPORT: “It’s a fight that everyone’s wanted for a long time, so if it does happen, happy days.

“I think it’s clear that I want the fight. It just caps the career I’ve had, to be in a fight such as that – the highlight of the career.

“I believe they [the fans] still want it. If we can get it across the line and it can happen, I think it’ll definitely catch fire again once we start promoting the fight.

Here SunSport details how the pair compare ahead of the long overdue grudge match.

Brook grew up under the guidance of Brendan Ingle at his iconic Wincobank gym in Sheffield, where Prince Naseem Hamed trained.

The welterweight debuted in 2004 and would go on to win the British belt while building his run up to a world title shot.

After climbing the IBF ranks, in 2014 he travelled to America where he dethroned Shawn Porter in a narrow majority decision verdict.

Brook made three defences of his titles – without facing a star challenger – before making the shock move up to middleweight.

Gennady Golovkin would beat the Brit in five rounds, and despite calls to move to super-welter, Brook boiled back down to welterweight to defend his title.

He made a good start against Errol Spence Jr, but the American would come on strong late to stop the fight in round 11.

After three wins super-welterweight, Brook went back down to welterweight last year as he challenged Terence Crawford.

But despite a good start, he was knocked out in round four and left with a decision on whether to retire or fight on.

Advertisement. Scroll to continue reading.
Kell Brook was beaten by Terence Crawford in his last fight

Khan burst onto the scene after winning a silver medal in the 2004 Athens Olympic Games.

Within four years of his 2005 debut, he became lightweight champion before moving up to win light-welterweight titles.

A controversial split-decision loss to Lamont Peterson – where he was deducted two points – and a KO defeat against Danny Garcia knocked the Brit’s confidence.

As Khan moved up in weights, so did his level in competition but never again did he reign as world champion.

He made the shock jump to face middleweight king Canelo Alvarez from welterweight in 2016 and was left brutally knocked out.

From then, it was a re-building job for Khan, who took a two year layoff and featured on ITV’s ‘I’m a Celebrity Get Me Out of Here’.

After two tune up bouts, Khan – before Brook – fought Crawford but was stopped in five rounds, as he was unable to continue from a low blow.

He did return to beat Billy Dib in Saudi Arabia, and continues to maintain that he wants to carry on his career with big fights to be had. 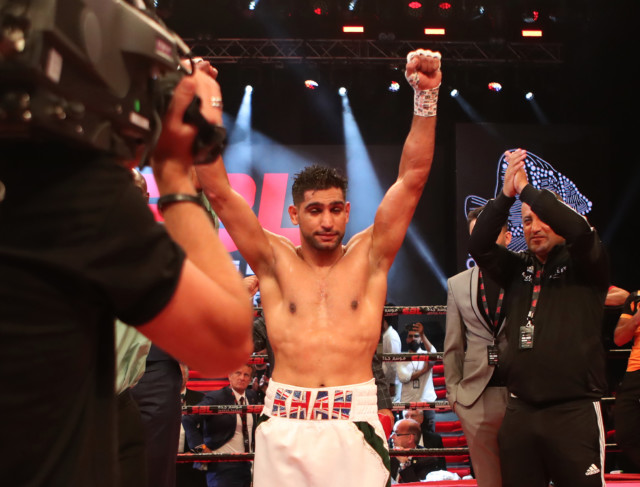 Khan has always had the speed advantage, with Brook the more powerful puncher, setting up a classic clash in styles.

When the rivals, now both 34, were in their prime, this fight was a true 50/50 and one of the best Britain had to offer.

But now, with both at the tail-end of their equally successful careers, the winner will be down to who has more left in the tank.

Brook showed good signs early on against Crawford, winning the battle of the jabs and defending well.

However, another stoppage defeat – following his two prior to Spence and GGG – will be tough on the body.

And Khan eased past Dib in his last fight, but looked completely outmatched against Crawford, appearing more flat footed and slower to the punch.

Brook will need to get behind his jab, and break his man down, picking the right spots to let go of his straight right hand or uppercut.

Whereas Khan has to use the ring to get in a rhythm and fight in bursts, stealing rounds in the process.

In this article:inthering, longtime, onboard