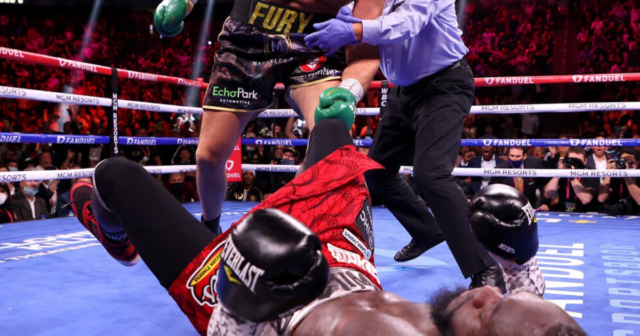 TYSON Fury might be aggressive in the ring, but outside of it he’s just Mr Nice Guy.

The Gypsy King, 33, was at his brutal best in the destruction of fierce rival Deontay Wilder in Las Vegas.

And since knocking out the American, he’s been enjoying the fruits of his success by clubbing in Las Vegas.

However, the modest fighter DOES have a soft side, as these examples show.

From paying £170 for two lobsters at a fancy restaurant to then release them into the sea, from giving his shoes to the homeless, Fury has a heart of gold.

While lobster is a lavish dinner for the jet-set, for Tyson it’s a defence-less animal.

Which is why the Wythenshawe boxer saved some from their death at a posh eaterie.

In an episode of ITV documentary Tyson Fury: The Gypsy King, he was filmed eating at a Marbella restaurant.

A waiter approached his table with two lobsters, amusingly called Lionel Messi and Cristiano Ronaldo, and offered them to Fury.

“No chance, I don’t like seafood,” Tyson responded before enquiring about the price.

“Take the elastic bands off their flippers and I’m going to set them free in the sea. I’ll give you the €200,” he continued.

Fury has a soft side, once buying lobster from a restaurant only to release it into the sea 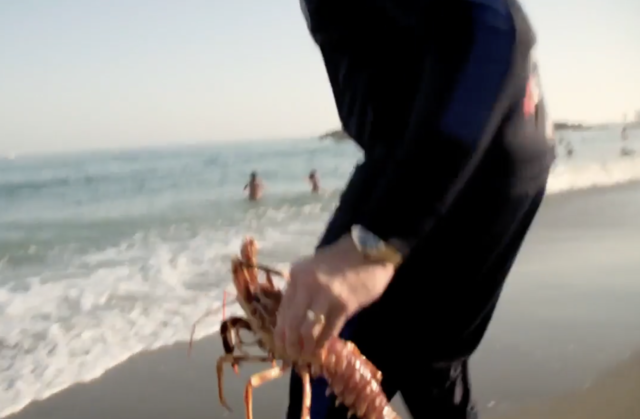 Fury frees the lobster by throwing it into the sea

The waiter agreed to the offer, before the pair were then filmed releasing them into the Mediterranean Sea.

“It was alive and it was going to get burned alive and I didn’t want to burn them,” Tyson said after the incident.

“I don’t like killing animals. It’s not often you can do something good in life and today, that was a good deed and it only cost me €200.”

It’s not only animals Fury has time for, his love also extends to the homeless too.

Like the time he was in Los Angeles and spotted a man begging on Hollywood Boulevard.

Instead of giving him money, Tyson donated his Nike trainers to him instead.

Tyson revealed: “What happened was, we were in Starbucks having a coffee minding our own business just looking out the window and there was this old fella outside no shoes on him – one shoe off, one foot bleeding.

“Everyone was looking at him like ‘get rid of him,’ he walked off and I thought that’s somebody’s child, that’s a human being.

“As he walked off through the crowd I heard somebody say to me, ‘give him your shoes, go and give him them shoes on your feet,’ I was like ‘yeah’.”

Tyson revealed his cousin and fellow fighter Hughie Fury called him an “idiot” at first after seeing him leave the coffee shop. 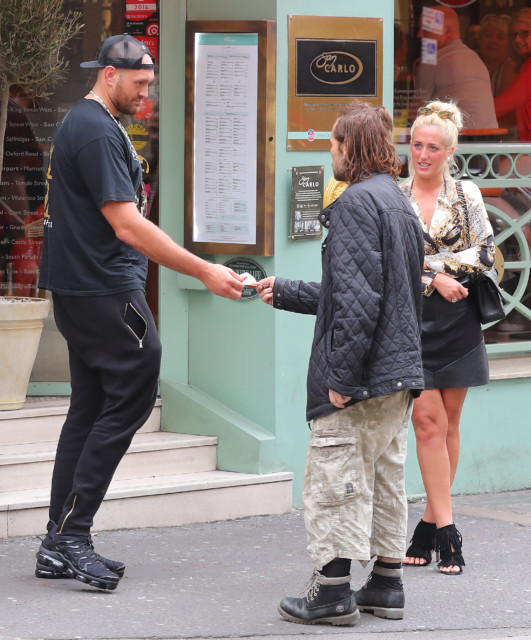 Whenever Fury sees a homeless person, he’s happy to give them some money 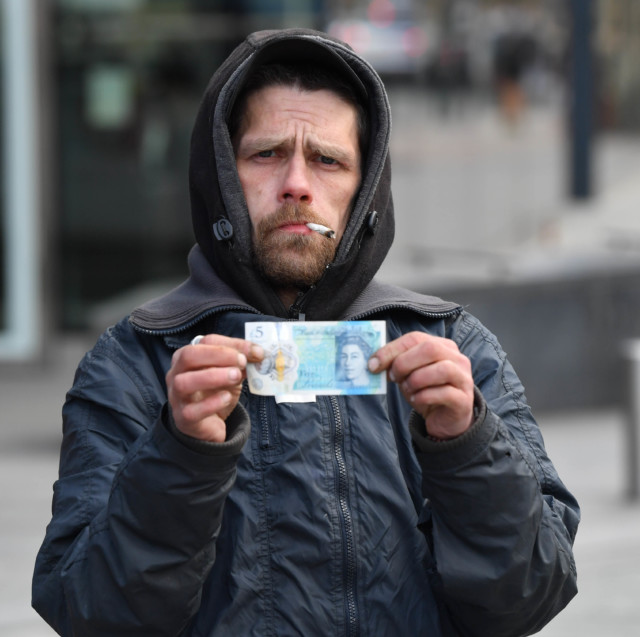 “He [Hughie] said, ‘what you doing, idiot, you’ve got no shoes on down Hollywood Boulevard you’ll get something in your feet.’

“I said ‘there’s a fella that needs them more than I do’.

“So I chased him down and said, ‘hey sir, excuse me’, and he [the homeless man] said, ‘what have I done – I haven’t done anything,’ he thought I was going to hit him or something, he must be used to getting punched or whatever.

“So I said I want you to have these shoes, they’re a brand new pair of these bad boys.

“I just walked down the street. He probably sold them later on for five dollars.”

LOOKING AFTER THE CUTS MAN

During his 2019 fight against Otto Wallin, Fury suffered a critical cut that could’ve seen the WBC champion lose for the first time.

But, thanks to Mexican cut-man Jorge Capetillo who was in Fury’s corner for the fight, he was able to continue and win the fight.

However, when Capetillo fell on hard times during the coronavirus pandemic, Fury was there to help him out.

As Capetillo explained to Sky Sports: “When he knew we were locked down because of Covid-19 and my gym was closed, he texted me and said: ‘Is there anything I can do to help?’ 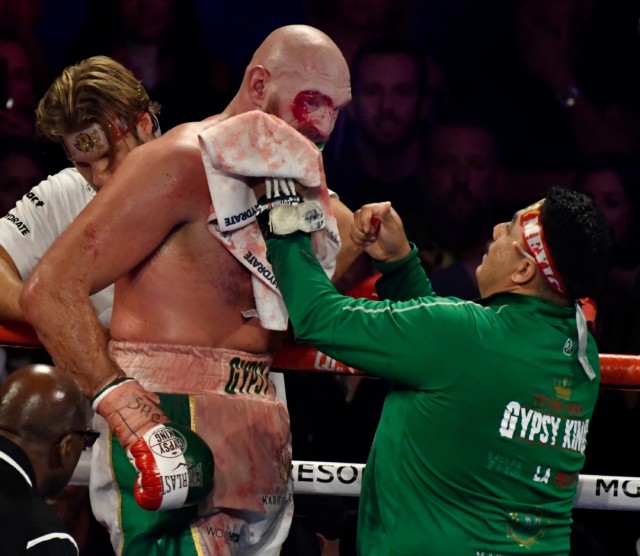 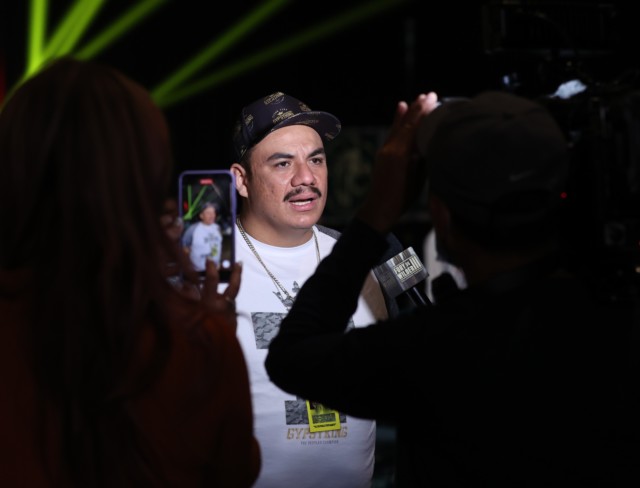 “He is still taking care of me. He sent me money.

“I was supposed to be with Jessie Vargas in New York on March 14 but the fight was cancelled and I came home with empty pockets. I was scared, I didn’t know what to do.

“He knew Jessie’s fight was cancelled. He asked about my family and what he could do. He said: ‘I’ll sort out some money for your family so you can be good’.

“Such generosity for me and my family.

“He is a great man, so humble. He had the time to ask how I was doing with my family during this crisis.”

In 2018, Fury claimed he was “skint” and on benefits because he’s given away his money to charities.

He told the Daily Record: “To be honest, I’m skint. I don’t have any money in the bank. I’m on the dole. 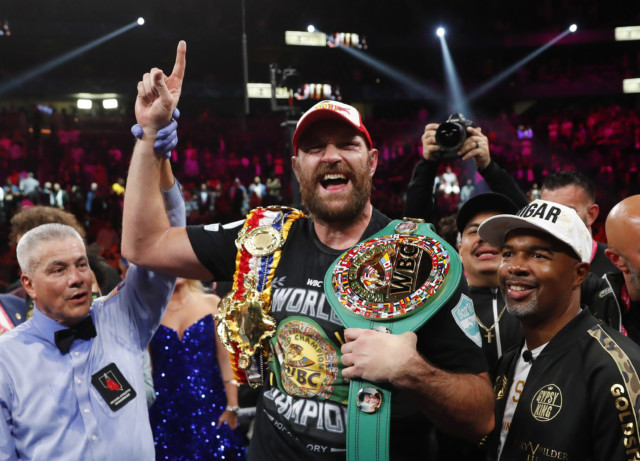 Fury once claimed he was skint, on Jobseeker’s Allowance, and gave all his money away

“I’m on Jobseeker’s Allowance at the moment. I’m not winding you up – I’m being truthful. Seriously, I didn’t make any money out of boxing at all. Don’t feel sorry for me – it’s not a bad thing.

“I give my promotional team half of the money and I donate the other half to charity or give it to people in need because I don’t think people should make money out of punching other people in the face. I fight because I love to fight.

“I help a lot of people with my money from boxing. I create homes, take homeless people off the streets, I give it to children’s charities . You can’t take money with you.”

DOING IT FOR THE KIDS

After the complicated birth of his sixth child Athena in early August, Fury set up a GoFundMe page for Alder Hey Family House Trust in Liverpool.

The children’s charity supported the Fury family, when Athena was in intensive care battling for her life. 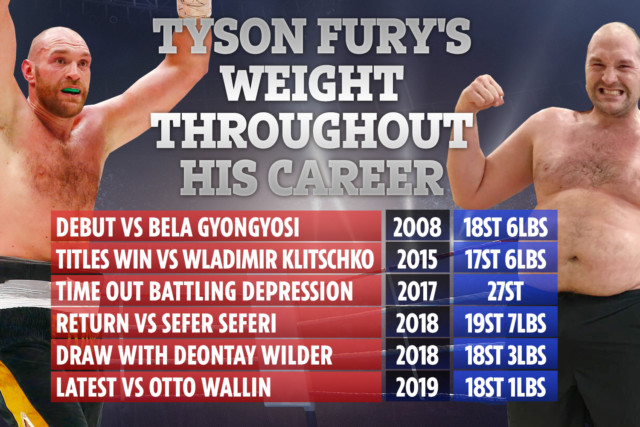 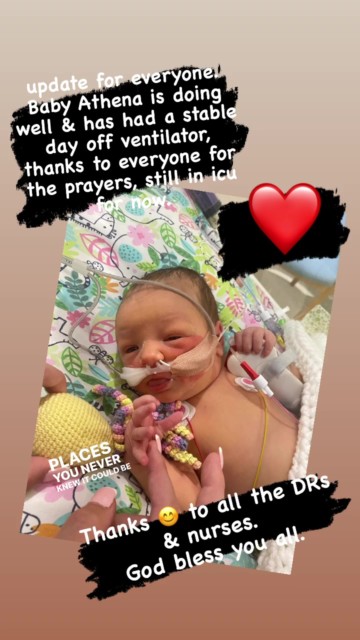 When Fury’s baby Athena was born in difficult, he set up a GoFundMe charity page for Alder Hey Family House Trust in Liverpool

He tweeted: “When the power of social media is utilised for good it’s beautiful to witness.

In addition to the GoFundMe page, Fury will auction off two signed WBC belts to raise more funds for the Trust.

Regardless of his day job, you can’t help but respect Tyson’s kind-hearted side.