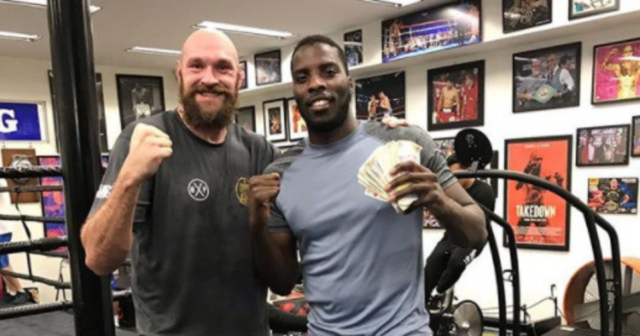 TYSON FURY knew Lawrence Okolie would go on to become world champion after they shared rounds of sparring together.

So much so that Fury, who hired the cruiserweight to prepare for Deontay Wilder before their original 2018 fight, reassured him of it.

That is despite Okolie being mentored and managed by the Gypsy King’s long-time rival Anthony Joshua.

The now-WBO champion was invited into Fury’s Los Angeles training camp to mimic 6ft 7in Wilder, and left being hailed as one to watch out for.

Okolie, 28, told SunSport: “That trip there, it really boosted my confidence and belief even further.

“I was in there with someone I knew was a legitimate heavyweight championship-level fighter.

“I’ve been in there with AJ, but we’re friends, so being in there with someone who is not my friend, but is respected as a boxer and getting off good work, I left there with confidence.

“They were even telling me in the camp back then, ‘Oh mate, you’re destined to be a world champion’.

“And I’m just happy I proved them and everyone else right.”

Okolie knocked out Polish southpaw Krzysztof Glowacki, 35, in round six of his crowning night.

The Londoner, who was inspired to box watching AJ in the 2012 Olympics while working at McDonald’s, now has his eye on unifications.

He said: “It’s mainly whoever I can get, you can’t focus on one person because they can lose a fight, or someone else could come up.

“But he would be my No1 choice, purely because he’s ranked No1 and I don’t like being around someone that’s ranked above me.

“I believe I’m the No1, and there’s not a cruiserweight that could beat me, but I have to go out there and show it for real.”

Before returning to the ring, Okolie has teamed up with his former employers McDonald’s launch a new Plan for Change. campaign.

It will see youth workers and services connected to every restaurant in every community by 2024, 3,000 apprenticeship roles being offered by 2025 plus helping one million people gain new skills and open doors to jobs by 2030.

Okolie said: “Working at McDonald’s gave me not just stability and direction but opportunities and training too.

“I would honestly say it was one of the best times of my life, working with my brother, making friends I am still close with and learning things like punctuality, confidence and respect.

“It was there I watched Anthony Joshua win at the 2012 Olympics whilst on a break in the crew room, which inspired me to start training and dream big.

“Anything is possible if you work hard enough and I encourage all young people to believe in themselves.” 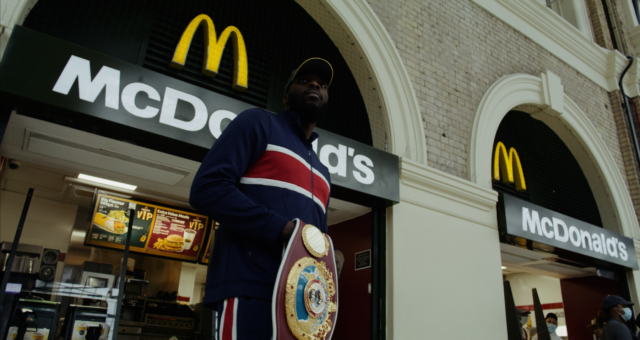 Lawrence Okolie outside the McDonald’s he used to work at