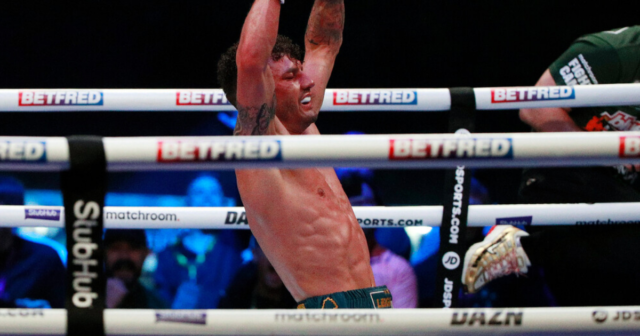 And the gamble paid off with Wood and mastermind trainer Ben Davison totally outboxing the 27-year-old before dropping him with a right hook in the 12th round and battering him before the ref dived in.

Can was unbeaten since 2014 but the British 9st champion dominated him with rasping uppercuts and crunching hooks.

In a cagey opener, Leigh unleashed his lethal right hand a few times but never hurt the champion.

Can peppered the Brit with an array of shots but never seemed to inflict any pain on the longshot underdog.

Wood scored with a brilliant uppercut in the second and fizzed shots into Can’s ribs but could not put a dent in the visitor.

Can had some success in the third when his pressure style broke through Wood’s guard briefly.

In the fourth Wood landed a crunching uppercut and hook combination that had his crowd roaring.

And that some punch rocked Can’s head back when Wood looped it up through his guard again in the fifth.

Wood proved his chin in the seventh when Can landed too many times for comfort.

Through rounds eight to ten, Wood kept landing crisp uppercuts and right hands from a safe distance, with Can unable to fight his way into the contest.

In the final moments a perfect right hook felled Can and even though he beat the count, Wood piled on the pressure until the referee stopped the onslaught.

Did you miss our previous article…
https://www.sportingexcitement.com/boxing/tommy-fury-added-to-jake-paul-vs-tyron-woodley-undercard-with-daniel-dubois-also-in-action