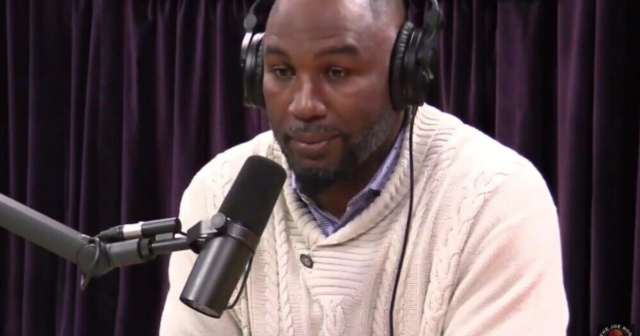 LENNOX LEWIS has spoken of how he and Mike Tyson were destined for greatness when put together for a sparring session as teenagers.

After winning the World Junior Championships, the British heavyweight was informed his true rival for the crown hadn’t even made it to the ring.

Lewis has opened up on how he first met Tyson
The pair sparred for a number of days in Catskill, New York

Given Tyson‘s preference not to fly out to the Dominican Republic for the competition, Lewis was encouraged to meet him.

Speaking on the Joe Rogan Experience in 2019, Lewis, now 56, recalled: “I won the World Junior Championships in Santo Domingo, Dominican Republic and I remember the American team were saying, ‘Oh well you never fought the best’.

“They told me it was Mike Tyson [and] Cus D’Amato. So me and my trainer left Canada and we drove all the way up there [to Catskill, Tyson’s base].

“While we were up there, [Donovan] Razor Ruddock was up there. They said, ‘Razor Ruddock didn’t spar with us’. So I said, ‘OK, I’ll spar with you, I’m here for four days’.”

Lewis gave a fascinating insight into how Tyson, now 55, was learning his trade, aged just 17 at the time.

He added: “The first time Tyson actually met me he was a really nice guy, he took me to his room and showed me some old flicks that I have never seen before of old time fighters.

“He would tell me about each fighter, he studied them. This was where he get his style of fighting from.”

Both men went on become heavyweight champion of the world numerous times and finally fought 20 years ago to the day, in 2002.

On that occasion, Lewis came out on top with an eighth-round knockout.

With both youngsters tipped for great success, the West Ham-born fighter admits to having a future bout on his mind when sparring Tyson.

He said: “First day in the gym, bell went, he came across and he was trying to kill me.

“I did my Muhammad Ali thing obviously and stayed away from his power, but the first day was really hectic.

“The second day was a little hectic but got better as it went along, and then the last day I actually got the better of him.

“I remember Cus D’Amato saying, ‘Mike! You’re gonna meet him some day, don’t you do that!’

“And that always echoed on my mind, ‘Will we ever fight?’. Because Cus D’Amato said we were going to fight, and it did happen.”

Last year, Tyson and Lewis were rumoured to be in talks for an exhibition fight, with Iron Mike returning to the ring to fight Roy Jones Jr late in 2020.

But for now, we’re left with just the memory of the 2002 fight – incredibly, fought two decades ago.