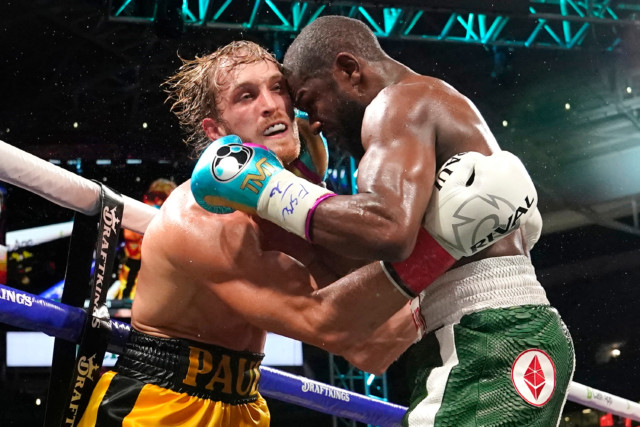 LOGAN PAUL has returned to training alongside his brother after fighting Floyd Mayweather and asked: ‘Who should I retire next?’

The YouTube star, to the shock of many, claimed a moral victory as he took boxing legend Mayweather the full eight round distance in their exhibition.

Logan Paul has returned to training after fighting Floyd Mayweather

Paul, 26, soon flew back to his newly-adopted training base in Puerto Rico and is already plotting his next move.

He posted on Instagram: “8 days since I fought @floydmayweather… back to work. who should I retire next?”

Paul was training next to his brother Jake, who is 3-0 in his career, all by knockout and returns to the ring on August 28.

He fights ex-UFC champion Tyron Woodley, 39, in his fourth and toughest fight to date.

Woodley, who departed from the UFC off the back of four straight defeats, has not win since 2018 and make his boxing debut.

He has boasted about being in line for a career-high payday, but his comments were hit with criticism by UFC president Dana White.

“Tyron Woodley’s 40-years-old. He hasn’t won a fight in three years in something he’s actually supposed to be good at.

“Now he’s going to go box. How do you sell that fight? Lots of other things than the s*** that should matter.”

But White has maintained the figure is fabricated, but backed the 1m PPV buys Logan and Mayweather reportedly did.

“Last time we had a press conference, I told you all the Triller stuff is bulls***, they’re lying, the numbers, those guys [Logan Paul and Floyd Mayweather] really did that number.

“That’s a real number. They did that. Jake didn’t do that. Logan and Floyd did and good for them.

“That’s a real number, they really did that and good for them.”