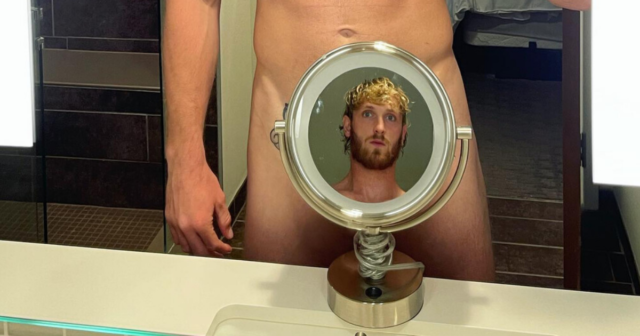 LOGAN PAUL covered his modesty with with just a picture of himself to celebrate his birthday.

The YouTuber-turned boxing and WWE star posted an almost naked picture with the caption: “I’m 27.”

It comes as Paul prepares for his in-ring professional wrestling debut at WrestleMania.

He will pair up with The Miz to face the team of Rey and Dominik Mysterio.

Mysterio, 47, said: “I have no doubt in my mind that he’s going to do great, just because he’s done some amateur wrestling and he has boxed against one of the greatest boxers in the history of boxing, Floyd Mayweather.

“There’s no doubt that The Miz is probably training him correctly, but my son and I have been working really hard and prepping up for this match because it’s an important one.

“For Logan to be present at WrestleMania, coming in as an outsider, it’s a big deal to be able to get the W that night.”

Of course it will not be the first time Paul has stepped foot into the ring, having had three high-profile boxing matches.

He first boxed in 2018 in a white collar bout against online rival KSI, 28, which ended in a draw.

But he lost their rematch a year later by scrappy split-decision when they turned professional.

Logan only returned last June but did so in a shock exhibition against boxing icon Mayweather, 45, which ended without a winner.

Logan Paul is set to make his in-ring WWE debut
Did you miss our previous article…
https://www.sportingexcitement.com/boxing/nobody-believes-him-tyson-fury-could-make-retirement-u-turn-and-keep-on-fighting-after-dillian-whyte-claims-trainer/
Advertisement. Scroll to continue reading.
In this article:loganpaul, nakedpicture, themiz