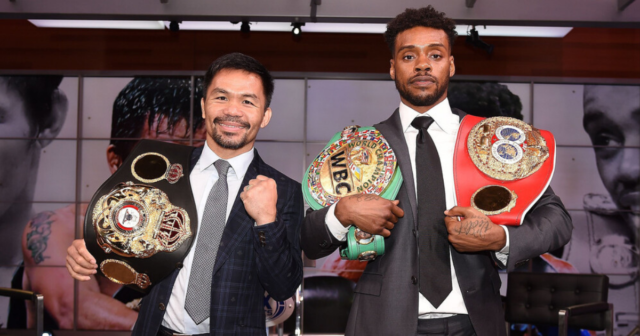 MANNY PACQUIAO, elected to the Philippines’ parliament five years ago with lofty ambitions to become president, is, like many politicians, economical with the truth.

Hero-worshipped by 111million of his fellow citizens, the majority will believe the Pacman when he says it’s his passion for boxing that’s led to him taking on Errol Spence Jr next month.

If the idealistic love of the sport is indeed the real reason why he is challenging the unbeaten Spence for his WBC and IBF world welterweight titles, he deserves universal admiration.

But the far more cynical view is that Pacquiao, despite the hundreds of millions he’s earned during his 26 years as a pro, is desperately in need of another huge pay cheque to help feed his extremely lavish lifestyle, gambling habit and over-generous philanthropy.

Otherwise why would a man of 42, whose skills started to decline long ago, who hasn’t fought for two years, make the dangerous decision to risk his health against Spence, 11 years his junior and rated one of the top four fighters on the planet?

Pacquiao’s day-to-day expenses are enormous.  The father of five has five estates in the Philippines, including a 14-bed beachside mansion.

He also owns two houses in America — one in Beverly Hills — and a fleet of 22 luxury cars.

But the senator, who knew abject poverty as a child, has given most of his fortune away to the needy.

A few years ago he financed the cost of 1,000 houses he had built for his home-town poor.

He is said to be worth £300million but he will need every penny if he is going to be able to keep up with the Money Mayweathers of this world.

Pacquiao was paid £8m for his last fight when, surprisingly, he outpointed the previously unbeaten Keith Thurman and is expected to get much more for his clash with Spence.

When Pacquiao climbs through the ropes in five weeks it will be  his 72nd fight and 25th world championship contest.

He has beaten 22 world champions and except for Mayweather, he’s defeated all his contemporaries including all-time greats Oscar De La Hoya, Miguel Cotto and Marco Antonio Barrera.

But he is under no illusions about the huge task he has set himself, which is why he started training and sparring two weeks earlier than usual.

Pacman hasn’t met a southpaw for 13 years and admits he doesn’t underestimate Spence, the 4-9 favourite who has won 21 of his 27 fights by KO.

Watching a Fox TV promo this week, the OTT presenter described the Pacquiao-Spence confrontation as Shakespearian.

Will wrote a few tragedies. I just hope we don’t see one on August 21.

Advertisement. Scroll to continue reading.
In this article:fiveyearsago, nextmonth, spencejr