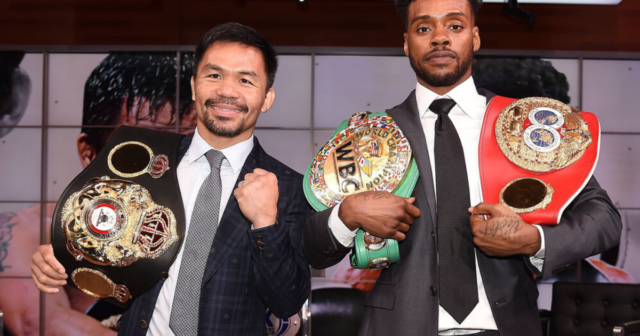 The Filipino icon looks to roll back the years and defy the odds once more when he challenges unbeaten Spence for welterweight titles in Vegas on August 21. 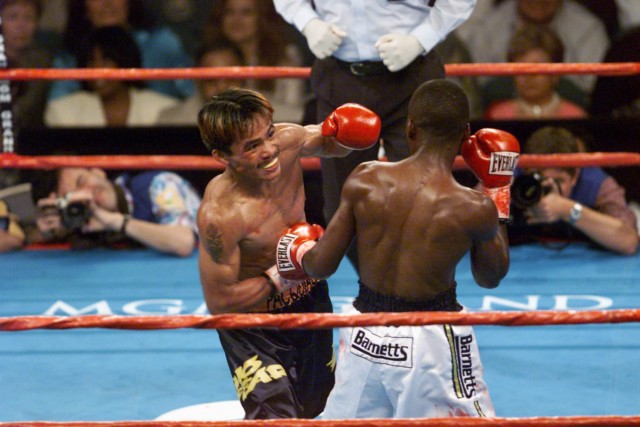 A win for Pacquiao, to his own admission, will put him among boxing’s greatest and potentially eclipse his two most memorable nights.

The first was when he beat Lehlohonolo Ledwaba in 2001 for the super-bantamweight world title – his first fight with trainer Freddie Roach.

And despite all the glory between and after those special wins, dethroning Spence, 31, at the ripe old age of 42 could put PacMan alongside the sport’s absolute best.

In an exclusive interview with SunSport, Pacquiao said: “We recently celebrated the 20th anniversary of my US debut where I beat Lehlo Ledwaba to win his IBF junior featherweight title.

“That was certainly special because it was also my first fight with Freddie.

“The fight that had the biggest impact on my career was against Oscar De La Hoya. Everything changed for me after that one.

“I got a lot of satisfaction beating Matthysse, Broner and Thurman in a 12-month period, becoming the oldest man to win a welterweight title. 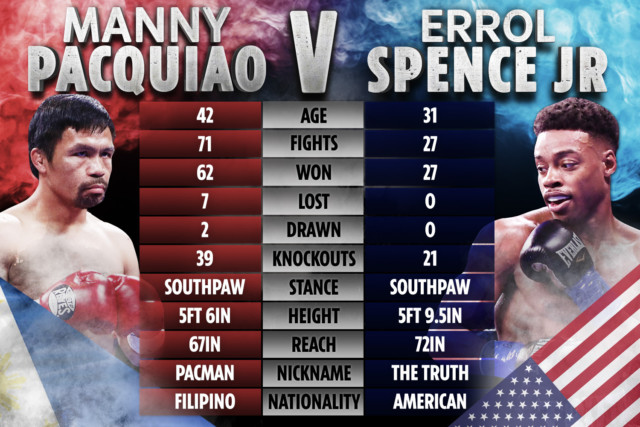 “Beating Errol Spence would be very special to me for all the obvious reasons and could elevate me into the discussion of being among the all-time greats in the sport.

“We have a lot of hard work left to do first for that to happen.”

Pacquiao will have been out the ring for over two years when he returns in Las Vegas, having last fought in July 2019 when he beat Keith Thurman, 32.

Thurman had promised to usher the boxing icon into retirement – but instead lost his WBA belt and unbeaten record.

Spence will also be defending his WBC and IBF titles as well as a 27-fight undefeated run and claimed he is the man to knock Pacquiao out of the sport.

PacMan knows he is once more dealing with an American pound-for-pound star looking to profit like never before by beating the ring legend.

But defending his honour for his loyal followers is what inspires him most as the golden oldie opened up about continuing to fight the best in the world. 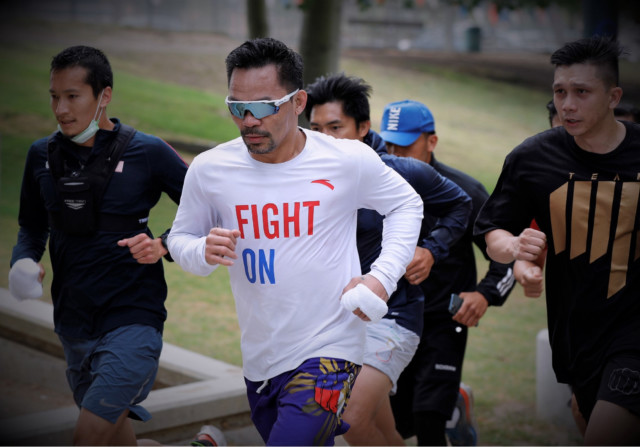 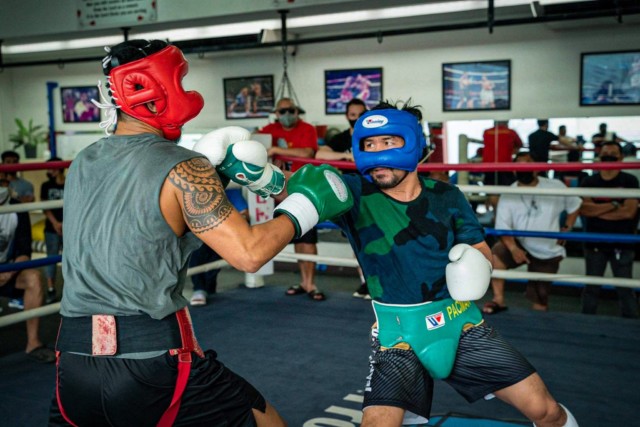 Pacquiao said: “It is easy. I love boxing. It is my passion.

“But I also want to give the fans a good performance and that is one of the many motivations for me train as hard as I do.

“To be at your best takes hard work. I want to win and show everyone I can still compete at the highest level.

“He is young, undefeated and a world champion. He also wants to knock my head off. That is all the motivation I need.”

Pacquiao has become beloved by boxing fans for his dazzling performances and reputation for the challenging the best in the business. 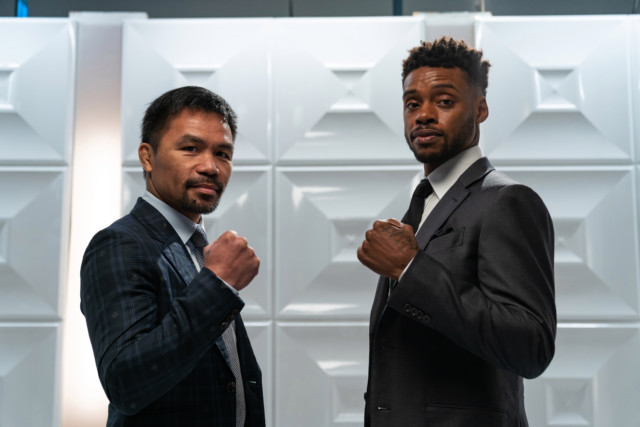 But after such a long lay-off, and no tune-up bout in between, even his most passionate and adoring supporters were shocked when Spence was chosen as the comeback opponent.

One man not surprised in the slightest was Hall of Fame trainer Roach – who has cornered Pacquiao against the greatest fighters over two decades.

But that was during PacMan’s prime, as they now enter uncharted territory in their 37th fight together.

Roach said: “Manny has fought a lot of good fighters, he’s fought better fighters than Spence along the way, but he wasn’t 42 back then.

“This opponent is a little bit flat-footed, but he’s a big puncher and someone we can’t stay in the pocket with. We’ve got to box and stay smart.

“But Manny’s work ethic is still there, he works his ass off everyday, he trains hard. He’s getting better and better as training camp goes on.” 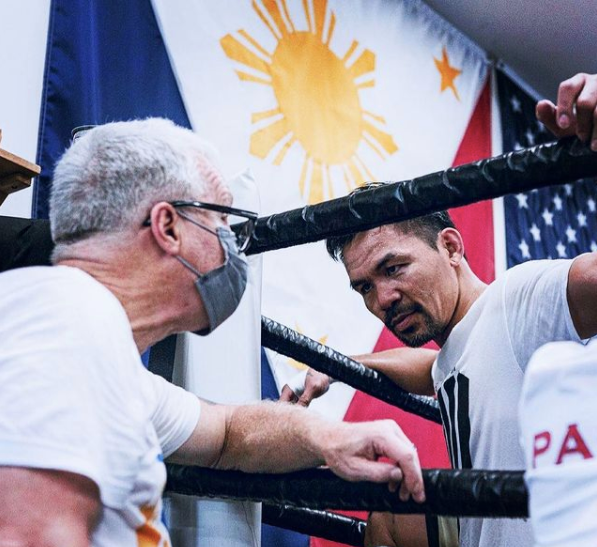 Trainer Freddie Roach in the gym with Manny Pacquiao 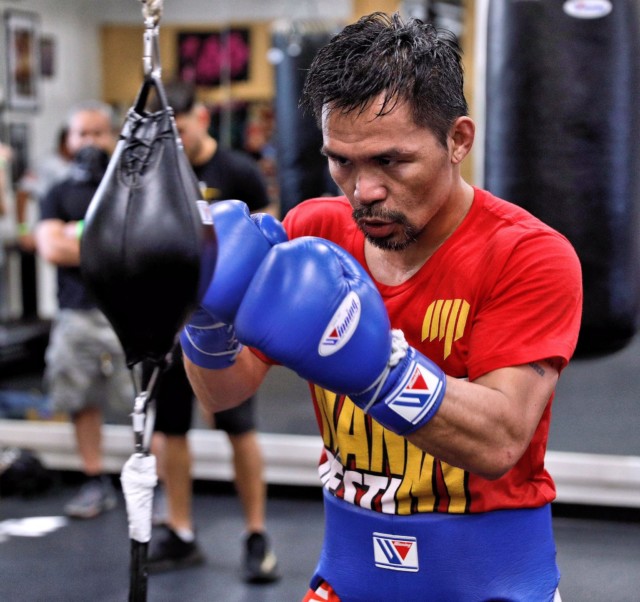 Manny Pacquiao training ahead of his return