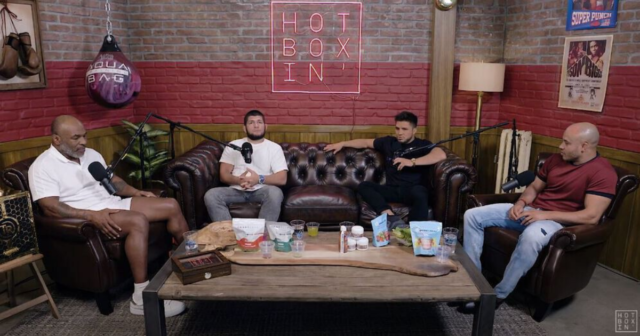 FANS have claimed that Mike Tyson was too stoned to speak during his recent Hotboxin’ podcast with Khabib Nurmagomedov.

Iron Mike – who recently sat down with the former UFC champion – smokes £33,000 of weed every month and runs his own marijuana ranch.

The former heavyweight champ has also been selling cannabis products since 2016 that are as potent as one of his uppercuts.

Tyson also incorporates the class-C drug into his podcast with a signature aspect being that the interviews take place in a ‘studio full of smoke’.

Yet the 55-year-old didn’t light up during his latest appearance out of respect for Khabib – who is a devout Muslim and does not drink or take any other substances.

But many fans speculated that this meant Tyson got high beforehand, and as a result, left co-host Henry Cejudo to facilitate much of the conversation.

One commented: “Are we just gonna ignore the fact that Mike apparently smoked the whole bag of weed before the podcast to not disrespect Khabib while talking to him, but it ended in Mike just not talking for almost the whole podcast because he’s high asf?”

Another joked: “Mike’s been visiting the spiritual realm. He was there in physical form, but spiritually, he was on another planet.”

A third added: “Man its sad that Mike was so high in this interview. He didn’t contribute much and he’s normally so eloquent.

A fourth user posted: “Mike Tyson was in another dimension in this episode. Triple C needs a raise!”

SunSport previously reported that Khabib revealed on the podcast that he turned down a $100million offer to face Floyd Mayweather.

Nurmagomedov retired in October in the first bout after the death of his influential father and coach Abdulmanap, who passed away in July.