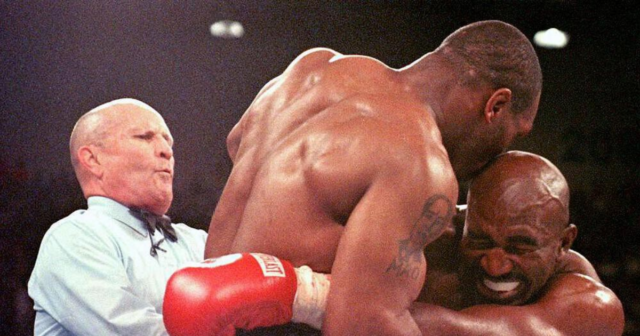 MIKE TYSON is just as famous for his flashes of madness as his vicious knockouts in the ring.

And one of the heavyweight icon’s most shocking moments came when he bit Evander Holyfield’s ear.

Tyson was disqualified from his world heavyweight title showdown against Holyfield almost a quarter of a century ago.

The incident on 28 June 1997 left onlookers at the MGM Grand stunned and has become part of 55-year-old Tyson’s legacy.

And in a recent interview with American radio host Alex Jones, ‘Iron Mike’ opened up on the infamous Holyfield incident.

Tyson was chewing on some of the ‘Mike Bites’ during the interview, when he said: “It tastes better than Evander’s.”

And the former world champion added: “Evander’s ear tastes like a**.”

Tyson was the youngest man ever to be crowned world heavyweight champion aged 20 back in 1986 when he beat Trevor Berbick.

And he’s rumoured to be planning another bout this year at the age of 55.

Iron Mike returned to boxing action after 15 years away when he took on Roy Jones Jr in an exhibition in 2020.

Like Tyson, Floyd Mayweather has been taking part in exhibition fights since ending his 50-0 pro career with his 2017 win over Conor McGregor.

Comparing the two legendary fighters on his podcast, Joe Rogan said: “The difference between Floyd and Mike Tyson is Floyd’s a 155lb.

“Even if he’s 55-years-old, he’s on all the Mexican supplements. He’s on everything.

“They use electrical muscular stimulation on him.”

There is no suggestion that Tyson has taken any illegal substances.

And any exhibition fight would be likely to carry more lenient rules than a professional bout.