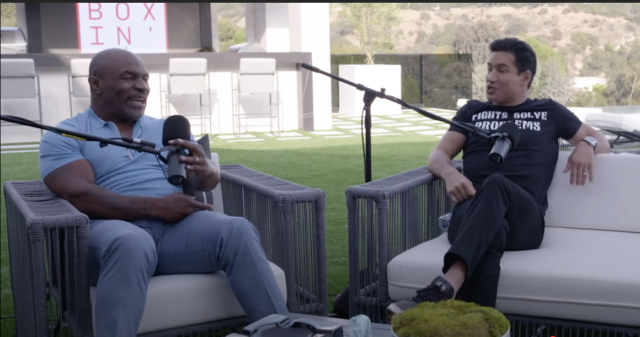 MIKE TYSON insisted the psychedelic ‘Toad Venom’ drug has kept him sober for six years and revealed he will only fight while high.

Tyson was overweight when he started taking the drug but said it inspired him to start training again.

Speaking on his podcast with guest Mario Lopez, co-host Henry Cejudo, an ex-UFC champion, claimed Toad Venom has kept Iron Mike on the straight and narrow.

According to AddictionCenter.com, toad venom is a psychedelic drug made ‘from a rare species of toad native to the Sonoran Desert’.

It is said to cause ‘hallucinogenic effects [to] take hold in about five minutes after ingestion, causing a powerful religious-like trip that lasts about an hour’.

Tyson told in 2019 of how toad venom ‘killed the monster inside him’ and buried the human wrecking ball that helped build his fame and fortune.

The reformed Baddest Man on The Planet is now building a cannabis empire alongside his business partner Alki David.

And he is a huge advocate for the medicinal benefits of the drug, and even smoked before his comeback fight against Roy Jones Jr in November.

Tyson told actor Lopez – a boxing fan and fight night host who has sparred Canelo Alvarez before – that he will only box while high on marijuana.

He said: “I wouldn’t fight if I couldn’t smoke, I’d be nervous as a motherf***er.

Did you miss our previous article…
https://www.sportingexcitement.com/boxing/ryan-garcia-returns-to-gym-and-break-to-help-with-mental-health-as-future-star-reveals-depression-hit-me-like-a-truck