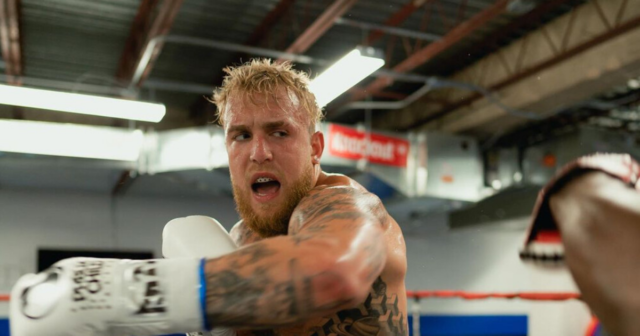 JAKE PAUL believes Mike Tyson is avoiding him because he knows the YouTuber would beat him.

The unbeaten Problem Child is currently preparing to face Hasim Rahman Jr at Madison Square Garden next month after his bout with Tommy Fury was called off for a second time.

Jake Paul is adamant that he would beat Mike Tyson

However, despite becoming friends with Iron Mike, he still wants to get in the ring with the Baddest Man on the Planet.

The former heavyweight champion, 56, shared the card with Paul when he made his comeback fight with Roy Jones Jr in 2020.

And since then speculation has continued to mount that the two men could join forces again in the future for another extravaganza – only this time as opponents.

Paul believes that Tyson is dodging him because he is afraid of hurting the outspoken star.

But the 25-year-old is adamant that it would be his hand held up victorious.

When asked if he would “f*** up” the veteran, Paul told the Flagrant podcast: “I don’t know if I would use those words, but I would win. I’m serious as a heart attack, it’s delusional optimism which is a real super-power.

“I want to start off by saying I love Mike Tyson. I love him, his family, he’s such a great guy, a wise man who has taken me under his wing.

“I owe him a ton of credit for helping me start my career with the Nate Robinson fight on his undercard.

“I think he thinks that he would knock me out, and I think that’s maybe the reason why he doesn’t want to do the fight.

“I think he wants to avoid maybe knocking me out, hurting me.”

Paul added: “[If he knew how good I was], maybe the fight would happen.

“Maybe him watching this fight will help, and I think there’s a very very high chance that [I knock him out].”

In this article:heknows, jakepaul, problemchild