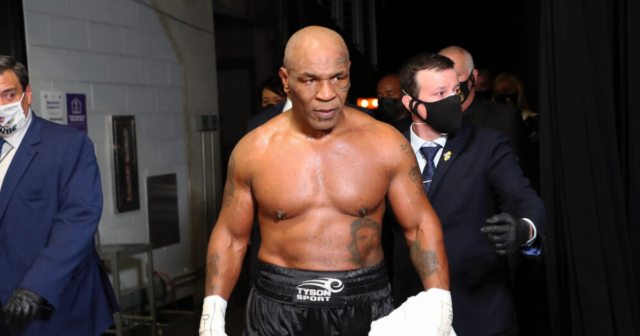 MIKE TYSON said he could knock out Jake Paul ‘so f***ing easy’ – but could NEVER fight him as his family ‘love’ the YouTube star.

The heavyweight boxing legend has formed a friendship with Paul and even had the American celebrity fight on his undercard in November.

Tyson, 55, came out of retirement for an exhibition bout with Roy Jones Jr, 52, which ended in a draw after eight rounds.

He has confirmed his intentions to fight again and was even called out by Paul’s older brother Logan.

But Iron Mike – the youngest heavyweight champion ever aged 20 – has ruled out facing the younger Paul, no matter how easy he thinks it would be.

Asked on the Full Send Podcast if he could KO Paul, Tyson said: “So f***ing easy. Yeah, but I would never.

“I’d be against my own f***** family. They love this little white motherf****er You know what I mean?

“He got balls. He’s got f***ing balls. When you see a white boy with balls, you know.

Paul, 24, debuted professional in January 2020, stopping online rival ‘AnEsonGib’ in one round.

He then knocked out ex-NBA player Nate Robinson, 37, on Tyson’s undercard.

Since then he has moved to 4-0, beating former UFC pair Ben Askren, 37, and then most recently Tyron Woodley, 39, in August

Paul is now in talks to fight Tyson Fury’s little brother Tommy, who featured on the 2019 edition of reality TV show Love Island.