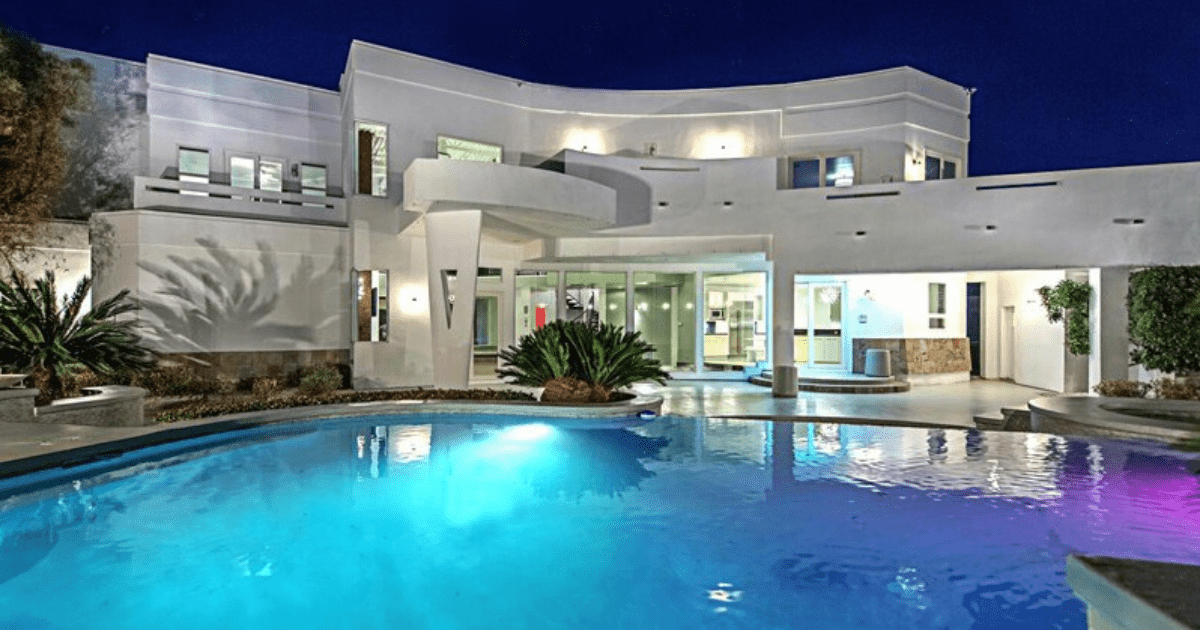 THIS is the house where Mike Tyson became a Hollywood star.

In 2008, the now 56-year-old former heavyweight champion let movie director Todd Phillips and his cameras into a stunning mansion he lived in with wife No3 Lakiha.

They filmed hilarious scenes for cult movie The Hangover, in a cameo that would go on to define him and rebuild his career after years of bankruptcy.

Found in the beautiful gated community called Seven Hills in the suburb of Henderson, it boasts six bedrooms, six-and-a-half bathrooms and its own private balcony.

Like many new builds in Las Vegas within gated communities, the 5,740-square-feet mansion was built in an Italian style in 2001.

Two-storeys in size, the entrance opens to a grand reception room with a 25-foot-high lit waterfall, which connects to the great room that has a wet bar and fireplace.

You can imagine the great room is perfect for lounging, and where cannabis-advocate Tyson may possibly enjoy an occasional smoke. 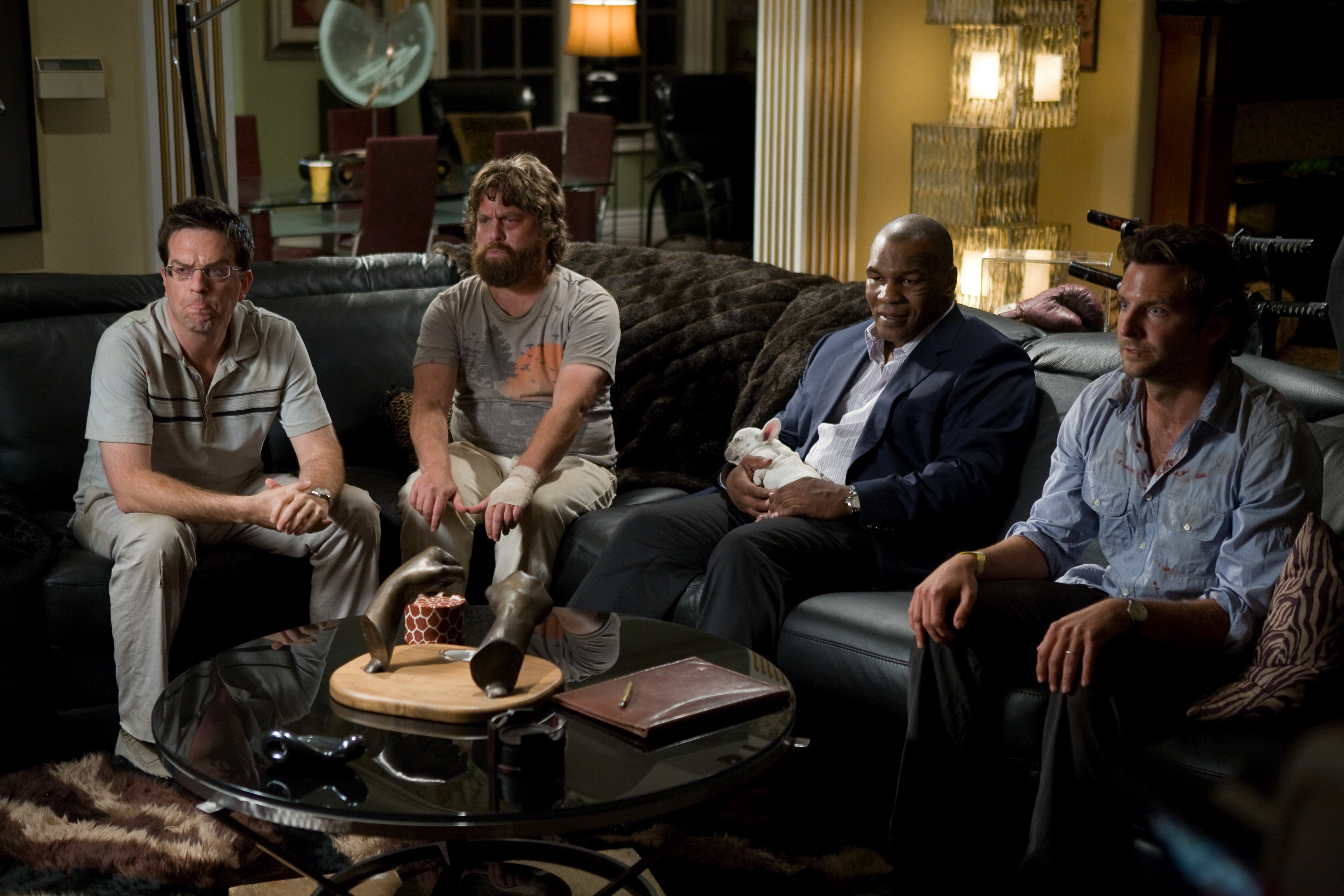 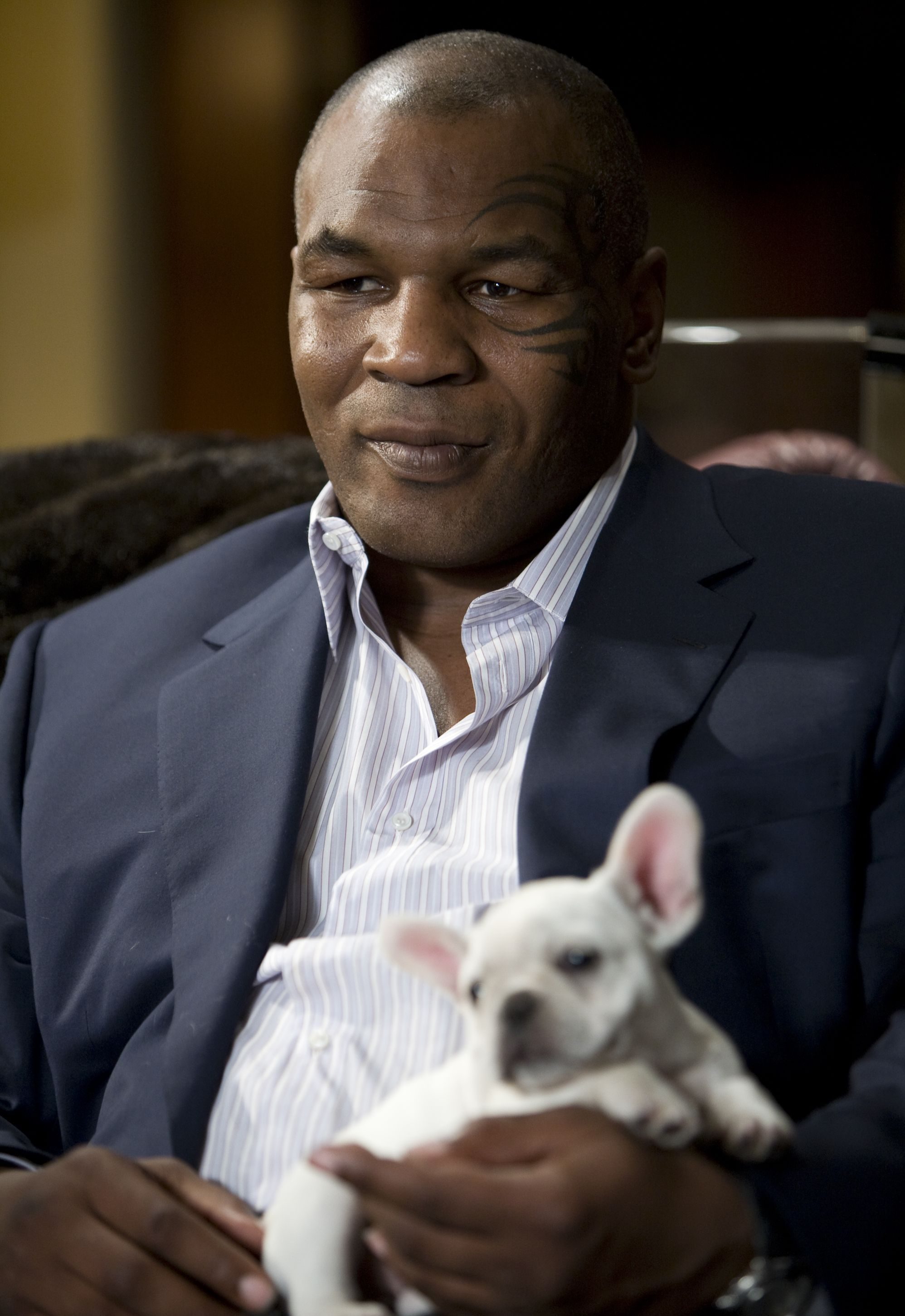 The living room has vaulted ceilings and walls of windows that offer plenty of natural light.

Completing the look is a family room with a moon-shaped wet bar.

While a centre-island kitchen has a another wet bar, and a wine cellar.

For those chilly desert evenings, the home has four fireplaces.

There’s also a garage for space for four cars. 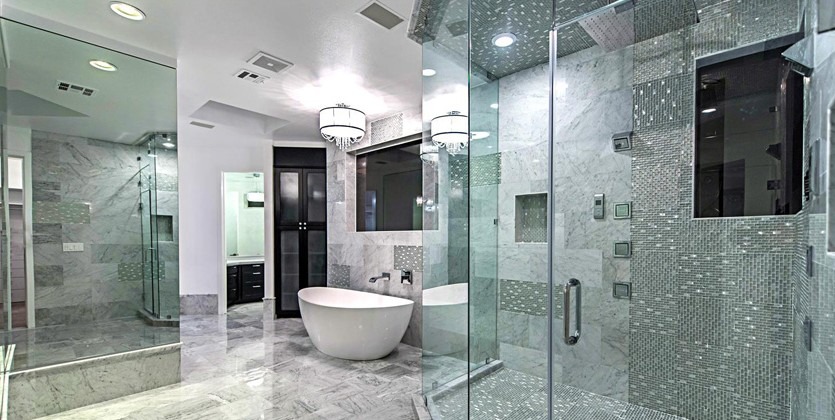 There are six-and-a-half bathrooms 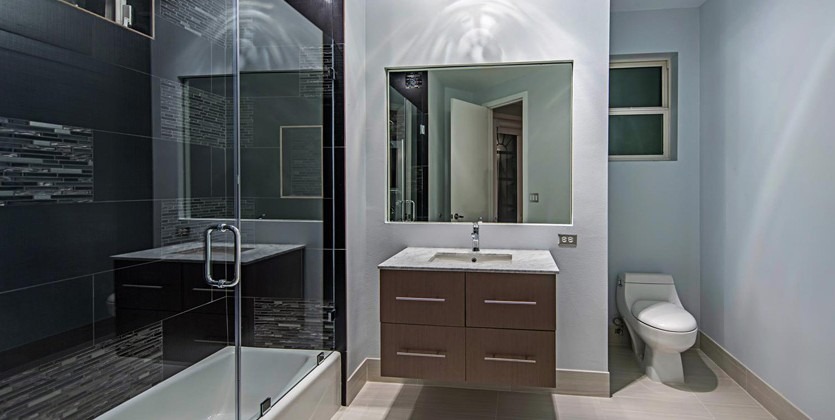 The Italian-style property was built in 2001 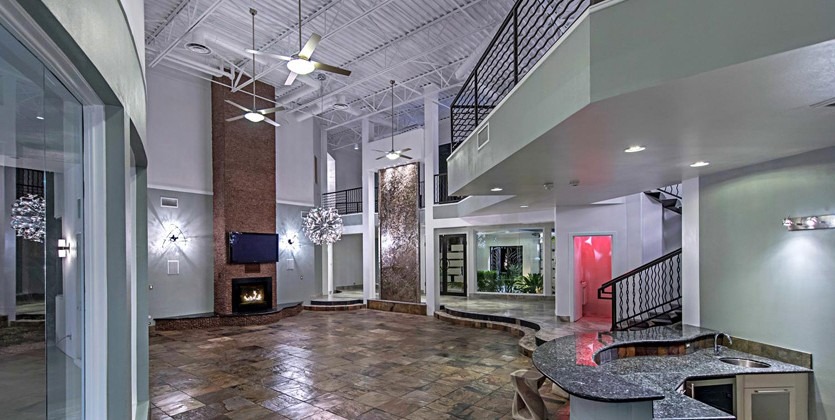 A 25 foot waterfall awaits you in the front entrance 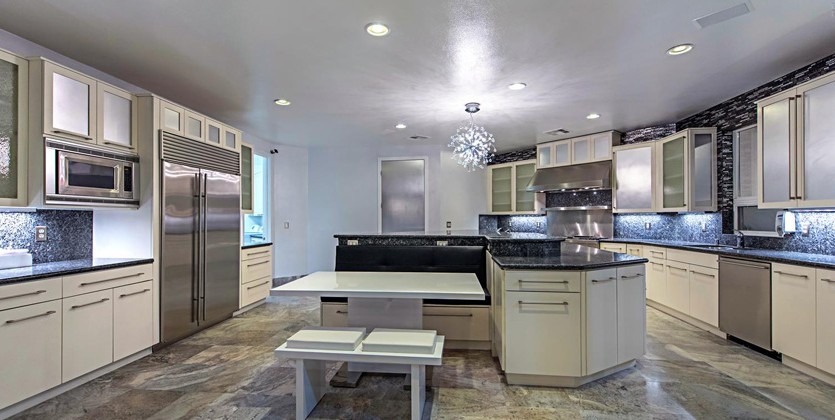 The kitchen boasts a centre island 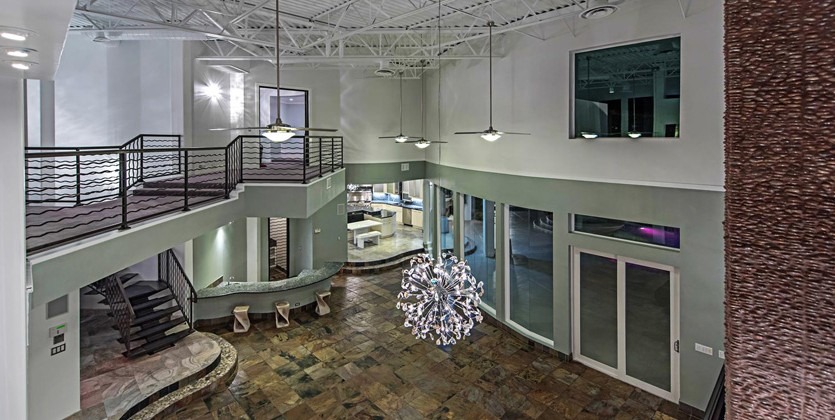 The mansion is two-storeys in size 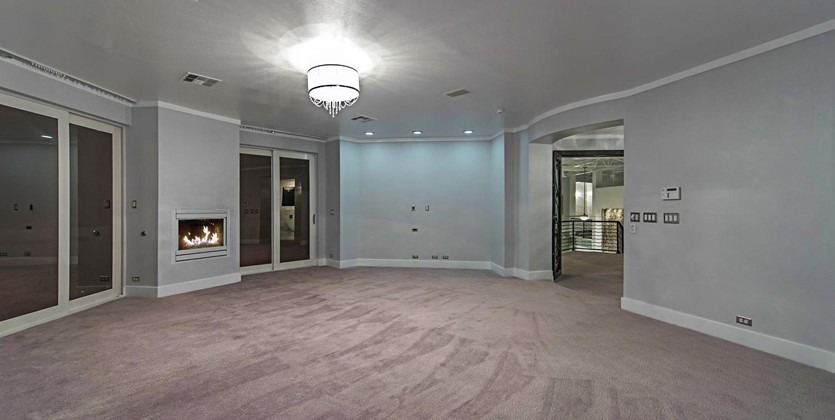 The great room could be cannabis advocate Tyson’s smoking room

The sprawling property also has plenty of outside space.

In total, the garden boasts an infinity pool with two spas and a waterfall, as well as a large patio area, featuring a fire pit, BBQ area, bar area and pool bathroom.

Movie fans will remember Zach Galifianakis urinating in it in The Hangover.

However, it’s the 18-hole golf course that’s shared with other residents in the private community, as well as four large parks that have basketball courts and football pitches that make it a scenic surrounding.

Tyson and Lakiha have lived in Henderson, Nevada since 2008, moving to a property nearby in 2016. But she won’t be happy if the ‘Wolf Pack’ pop round, mind. 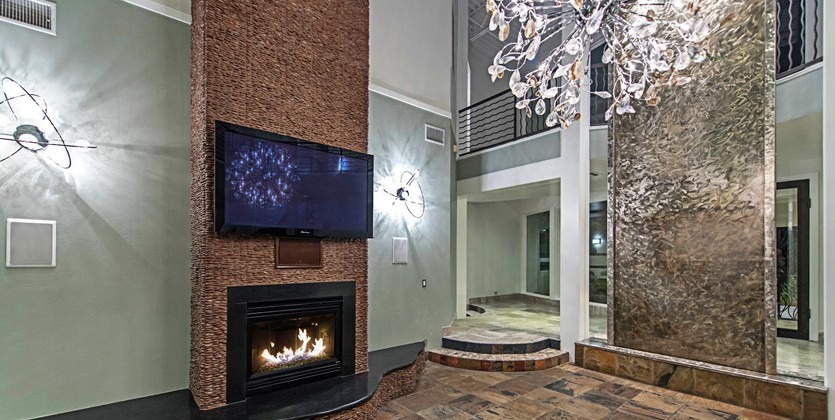 The property boasts a total of four fireplaces 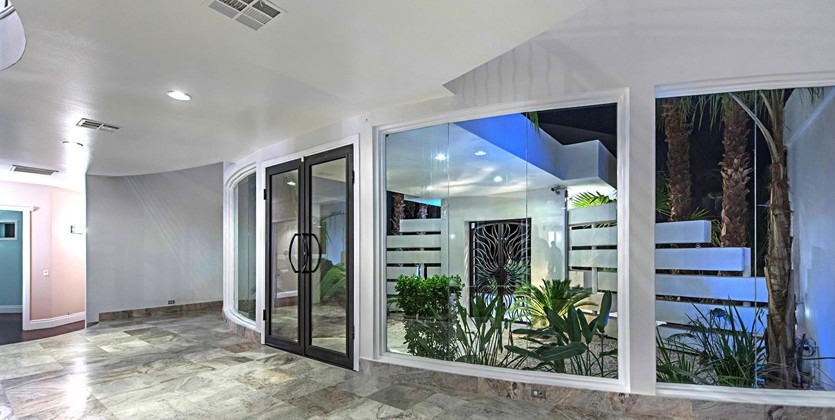 Large windows mean the property has plenty of natural light 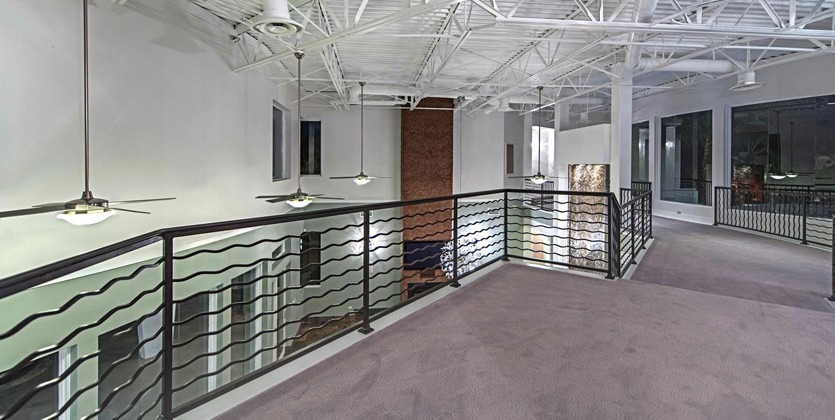 The wrought iron staircase runs through the home 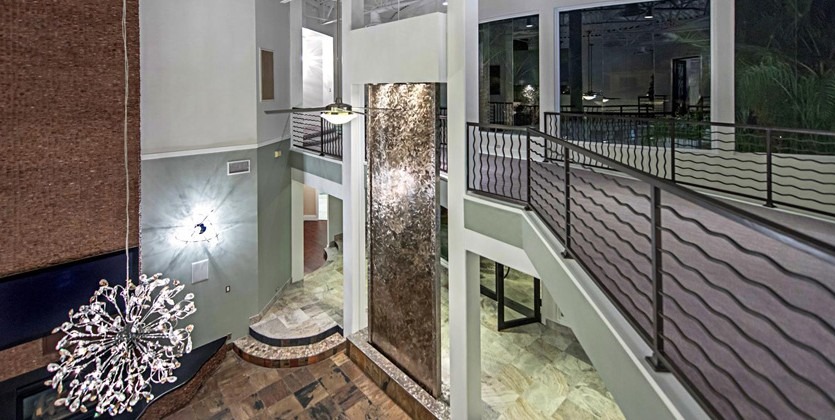 Tyson and his wife Lakiha have lived in Henderson, Nevada since 2008

Always protect your head when being attacked. It is your goal to not get punched. To avoid being punched, you must learn how to stop an incoming punch. Here are the steps:

If you’re looking for a partner to practice boxing, you can watch boxing matches on television. You could also look for an amateur boxing club in your area. Amateur boxing clubs often hold regular training sessions. These sessions usually involve sparring partners who hit pads together.

Boxing is one the oldest martial arts known. Boxing is considered one of the most difficult sports to practice. It’s not enough to punch someone in their face and knock them out. You have to be able to defend yourself against kicks and punches.

Finding a nearby boxing gym is the first step. Once you have found a suitable place to train you’ll need some gloves or headgear. Gloves protect your hands while the headgear protects your head. You will also need shorts and a shirt.

Once you have everything you need, you will need to warm up. Start slow and build up speed. You can then go to the mat and spar with another fighter when you feel ready. Do not worry if you make a mistake. Try again until you get it right.

Boxing is a popular sport. It is a fight between two opponents. Boxing rules vary from one country or another. There are three types: Amateur, Professional, or Olympic boxing.

Amateur boxing can be practiced at school or college. This type of boxing allows sparring without protection. Amateur boxing competitions usually last three rounds and last five minutes each. There are many different styles of amateur boxing including Kickboxing, Muay Thai, Taekwondo, Karate, Judo, Wrestling and others.

Olympic boxing can be seen at the Olympics. International standards dictate that boxers must wear protective gear. The competition lasts eight rounds of three minutes each. Only two types of Olympic boxing are available: Light Flyweight or Heavyweight.

There are seven types. Each punch is different. Some punches are more powerful than others. An uppercut, for instance, requires tremendous strength. However, a straight punch is much more powerful and faster than other punches.

A boxer protects himself by using his body. He does so by using his arms, elbows and hands as well as his knees, knees and legs.

To defend against kicks, a boxer should use his legs. When he receives a kick, he raises his leg and moves away from the attacker. To avoid being kicked on his side, he will bend his knees if the attack is from the front. However, if the attack comes from behind, he stands up straight and blocks the kick with his foot.

If he is being attacked, a boxer must take a step back and counter-attack. This way, he can gain distance between himself and his opponent. Additionally, boxers need to maintain their balance when they counter-attack.

To box effectively, a boxer must establish a stance. His stance will determine how he defends. It is how he positions himself and where he faces the opponent. There are many positions that boxers can adopt. Here are some of the most common ones:

A boxer must change his position, speed and rhythm in order to win the fight. This includes changing speed, position and rhythm.

Advertisement. Scroll to continue reading.
In this article:boasts, pool, used