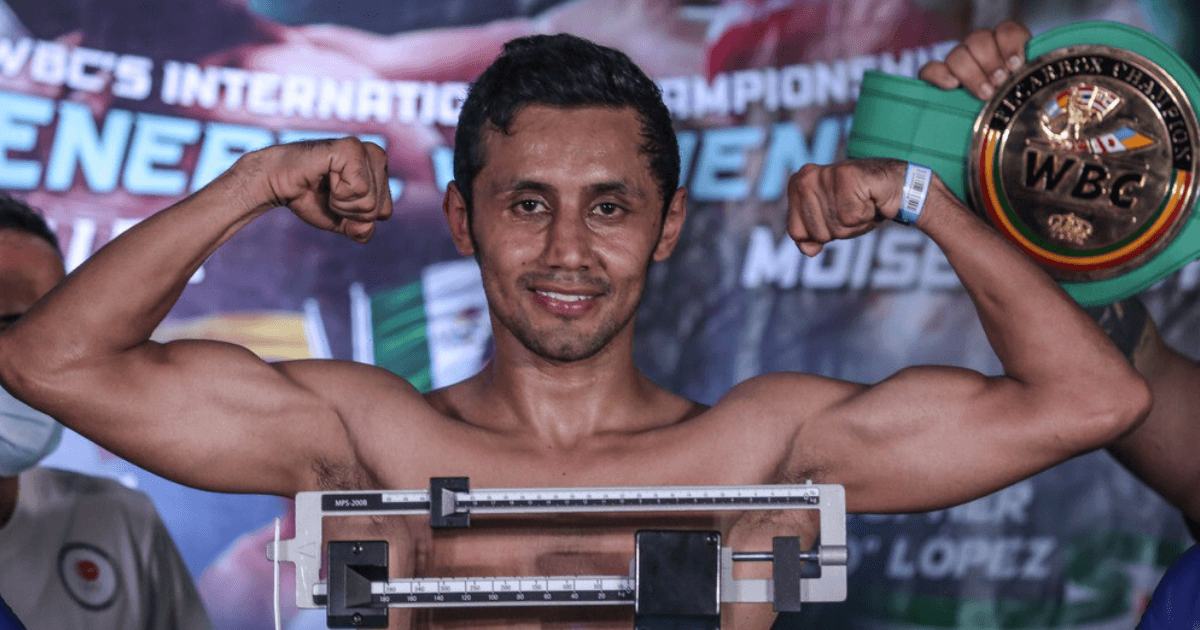 FORMER world champion boxer Moi Fuentes has tragically died at the age of just 37, one year after suffering a brain clot in a fight.

The Mexican, who went from minimumweight up to super-fly, suffered the devastating injury in a sixth round knockout defeat to David Cuellar Contreras in October 2021.

He was swiftly rushed to hospital, but now it has been confirmed by WBC president Mauricio Sulaiman that Fuentes passed away on Thursday morning.

“Our condolences to his family and friends and our appreciation to his wife for her dedication and dedication with indescribable love during this difficult year of suffering.

Fellow Mexican boxer Sulem Urbina also paid tribute to Fuentes, saying: “Moises Fuentes last fought Oct 2021 was knocked out. Since then had surgery and battled a whole year to try and stay here for his family.

“Today he says goodbye. Today I ask the boxing world not to forget him. Today ask to respect boxers and pray every time one steps in the ring.

“It was a pleasure to coincide with you in this life friend. Rest in peace Moises Fuentes.”

While a fan added: “Damn. Horrible news regarding the passing of Moises Fuentes. He shared the ring with the very best from 105 to 115. Rest in peace, Champ.”

And another said: “Ahh man

Rest in peace to Moises Fuentes!”

Fuentes won 25 of his 34 professional bouts, with 14 victories coming by way of knockout.

In 2011, he became WBO minimumweight world champion by winning a split decision against Raul Garcia in Guadalajara.

He then attempted to become a two-weight world champion in 2013, fighting Donnie Nietes for the light-flyweight title in the Philippines.

And while he produced an impressive display, it ended in a split decision draw.

He stepped away from boxing in 2018 after two knockout defeats in a row – including a first round KO loss to WBC flyweight champion Daigo Higa.

But Fuentes then returned in 2021 after more than three years out of the ring, only to lose to Cuellar and suffer the heartbreaking brain clot in the process.

You must protect your head whenever you are attacked. It is your goal to not get punched. To do this, you will need to learn how to prevent an incoming punch. Here’s what to do:

You won’t be able to fight if you don’t know what fighting is. You’ll just get beaten up. But if you do know how to fight, you’ll be ready for whatever comes at you.

For strength improvement, weight lifting is an essential part of your fitness routine. However, there are certain guidelines you should keep in mind when lifting weights. You should not overdo it. Second, try to lift heavier weights every other day. Third, repeat each exercise eight times. Fourth, between sets, take 2 minutes to rest. Fifth, do all exercises without momentum. And lastly, put more emphasis on form than speed.

Boxing is one among the oldest martial arts known. China is where the first known boxing match took place in 2200 BC. Since thousands of years, boxing is a well-known sport. Today, boxing is still popular among athletes and celebrities. It takes approximately 10 months to master boxing.

The reason why it takes so long to learn boxing is because it involves many different types of movements. Each movement requires specific muscles in order to be effective. These muscles take time to build.

Boxing is the most loved sport in the world. It consists of two opponents who try to knock out each other’s head. Different countries have different rules. In general, there are three types of boxing; Amateur, Professional and Olympic boxing.

Amateur boxing may be done at school, college, and university. This type of boxing allows sparring without protection. Usually amateur boxing competitions consist of three rounds of five minutes each. There are many styles of amateur boxing such as Kickboxing or Muay Thai, Taekwondo and Karate, Judo and Wrestling, among others.

Olympic boxing is performed at the Olympics. Special protective gear must be worn by boxers to ensure compliance with international standards. The competition lasts eight rounds of three minutes each. Only two types of Olympic boxing are available: Light Flyweight or Heavyweight.

There are seven kinds of punches: Left Hook, Right Hook, Uppercut, Cross, Straight, Overhand and Underhand. Each punch is unique. Some punches need more power than others. An uppercut, for instance, requires tremendous strength. A straight punch, on the other hand requires less power and is quicker than other punches.

There are also different combinations. These are combinations of punches that work together to achieve a specific goal. A combination may have multiple parts. A left hook followed with a right-cross will cause injury to the opponent’s jaw.

A boxer must use his legs to defend against kicks. If he gets kicked, he raises one leg and turns away from his attacker. If the attacker is coming from the front, he will bend at the knees to avoid getting kicked on either side. But if the attack comes in the back, he will stand straight and block the kick using his foot.

Boxing is only possible if a boxer has a clear stance. How he defends his self will depend on how he stances. It determines his position and the direction he will face. Boxers can take many different stances. These are the most popular:

Sparring is an exercise session to improve boxing skills. A sparring session is where a boxer trains both his mind and his body. Sparring is a way to learn how to fight without getting hurt.

Did you miss our previous article…
https://www.sportingexcitement.com/boxing/julia-rose-and-jake-paul-leave-little-to-imagination-while-frolicking-in-waterfall-pool-on-hawaii-holiday/

Advertisement. Scroll to continue reading.
In this article:formerworldchampion, fuentes, passesaway