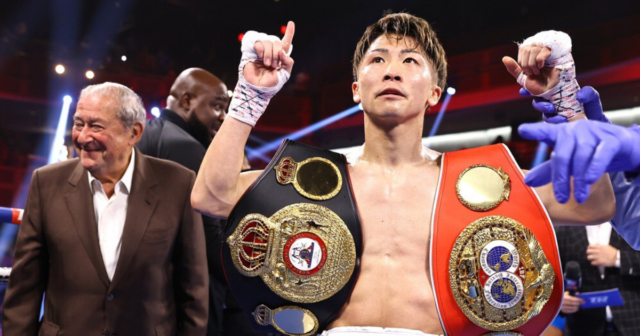 The three-weight world champion, who is rated as one of the best pound-for-pound fighters in the world, demolished Filipino Michael Dasmarinas inside three rounds back in June.

And now, after two fights in the US, Inoue will return to fight in Japan in front of an adoring home crowd.

The 28-year-old holds the IBF and WBA bantamweight titles having already won belts at light-flyweight and super-flyweight.

He has won all 21 of his professional fights to date, stopping 18 of them in the process.

Meanwhile, his opponent Dipaen has already lost two of his 14 pro contests.

He has only fought outside of Thailand on three occasions, two of which came in defeat.

Dipaen travelled to Russia and lost to Zafar Parpiev in just his third bout, before then facing Tommy Frank in Sheffield two years ago where he was beaten by split decision.

Inoue will be an overwhelming favourite heading into the fight as he looks to set up an undisputed clash against either Nonito Donaire or John Riel Casimero.

WBC champion Donaire and WBO title holder Casemiro are set to face off in a unification clash, with Inoue hoping to face the winner.

Following his knockout win back in June, the Japanese boxer said: “I prepare myself to knock them out, whether with a head shot or a body shot. I came prepared and to get a win by knockout is good for me.

“The first round, I just wanted to see what he had. It depended on how he came out, and after a little while, I thought I could get him out.

“Getting the win makes me smile, but to be able to fight the winner of Casimero and Donaire, that brings me another smile.”

Inoue already beat Donaire in 2019 when he won a thrilling fight by unanimous decision.

Advertisement. Scroll to continue reading.
In this article:intheworld, thering, worldchampion