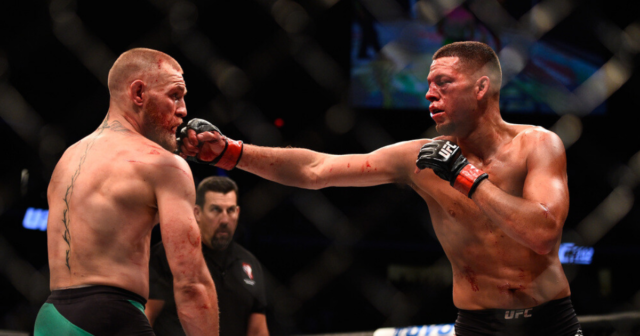 NATE DIAZ will leave the UFC after his contract expires to fight Jake Paul for up to £10million, his former opponent predicted.

Diaz has just one bout left on his current UFC contract and recently hinted at facing Tony Ferguson.

So far, he is yet to extend his deal and Josh Thompson believes the American is eyeing a lucrative boxing switch to fight Paul over a trilogy with Conor McGregor.

“This is his last fight, he’s not fighting in the UFC anymore. He’s going to leave and he’s going to fight Jake Paul.

“He’s just trying to get a fight to get out the door, he’s done with MMA. He knows that fight is going to make him double then he’d make [against McGregor].

“Conor’s not that draw anymore that he once was. Conor can’t get out of his contract, he’s on an eight or ten fight deal I believe.

“So he’s stuck with the UFC forever. Speaking from a Nate point of view, I think Nate’s going to leave and end up fighting Jake Paul in boxing.”

The trilogy decider is yet to materialise despite the pair regularly goading each other online.

But Thompson, the only man to ever KO Diaz in the UFC, believes the rubber match could take place in the boxing ring.

And he claimed his old rival could end up making over TRIPLE the money to fight YouTuber-turned 4-0 boxer Paul opposed to McGregor.

“If Nate goes and beats Jake Paul, then I can see Dana saying, ‘OK, let’s fight Nate in boxing’. I couldn’t see him doing it before, he has to beat Jake Paul first.

“If he beats Jake Paul I can see him riding Conor in to be like, ‘Nate and [Conor] in boxing makes sense’.

Advertisement. Scroll to continue reading.
In this article:jakepaul, natediaz, sofar