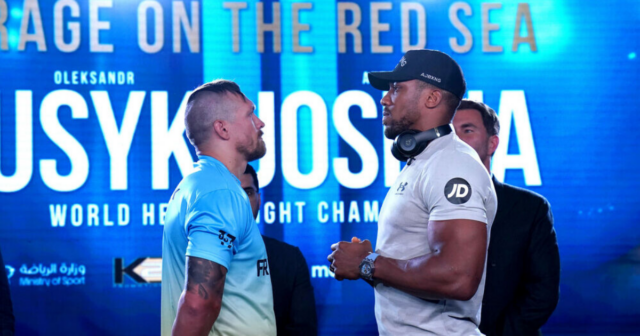 OLEKSANDR USYK has left no stone unturned ahead of his rematch with Anthony Joshua – but he recently left his team stunned with an insane swimming session.

The unified heavyweight champion has been working out THREE TIMES a day during his Dubai training camp for his maiden title defence.

The Ukrainian has beefed up ahead of the Saudi showdown 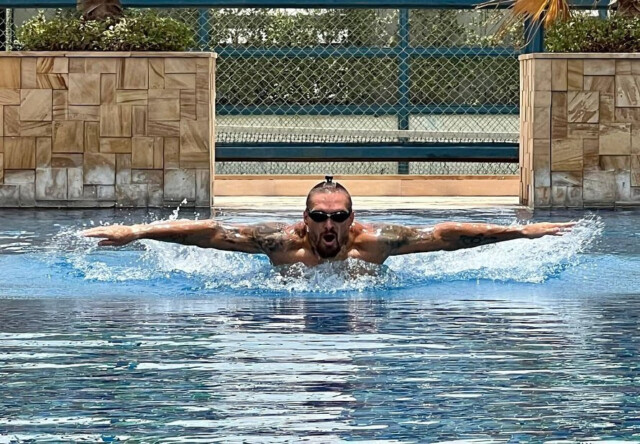 But the defending champion’s swimming antics have left his coaches stunned.

Swimming has been a staple of Uysk’s training for years, although he astounded former opponent Derek Chisora and his team by performing lengths in the pool for FIVE HOURS during a recent trip to a Russian bathhouse.

Del Boy said: “The owner told me to wait because he had a surprise.

“I sat down and all I heard was, ‘Derek, Deeeerrrrrek.’ Just like he kept saying during the build-up to our fight.

“I started talking and laughing with him and I told him he looked tired. He then told me he had just finished swimming for five hours.

“I told him he was lying, he couldn’t swim for five hours.

“But his trainer told me it was true and then showed me a video of him in this huge Olympic pool just going up and down for five hours.”

Usyk’s gruelling training sessions over the last year have seen him pack on several pounds of muscle.

The undefeated Ukrainian tipped the scales at a solid 100kg (224.5lbs) for his Tottenham tussle with AJ last September – which he won via unanimous decision.

But judging from his recent training pictures, he’ll be a few kilos heavier for next Saturday’s Saudi showdown.

Former unified light-welterweight champion Amir Khan recently caught up with Usyk in Dubai and recently claimed the southpaw told him he’s put on a whopping 15 kilos.

“I mean he was telling me that he’s put on an extra 15 kilos since he last fought AJ, so, we’re going to see how much strength he’s going to be having.

“He looks like a full-on natural heavyweight. He is big and looks very strong.

“He nowhere near looked like a cruiserweight he looked like a nice full blown-up heavyweight, he was strong at the weight, when he was hitting the pads and stuff and you can see the definition on his body.

“He’s very thick and you can see it’s solid muscle that he’s got.”