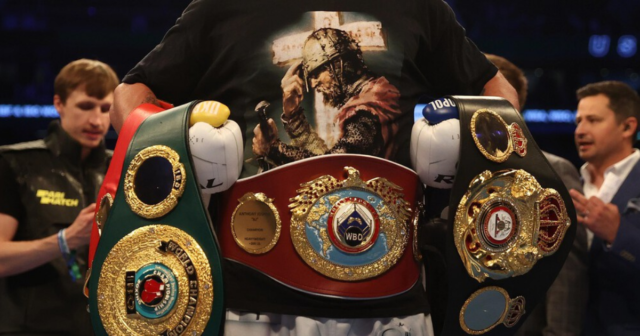 OLEKSANDR USYK is confident that he can beat Tyson Fury after overcoming Anthony Joshua again.

The Ukrainian, 34, upset the apple cart last month when he produced a stunning performance to out-point AJ over 12 rounds at Tottenham Hotspur Stadium.

Usyk will put his newly acquired belts on the line in the spring when he rematches Joshua.

But he already has his sights beyond AJ and on dethroning the Gypsy King and unifying the heavyweight division.

Asked by SunSport if he can see a huge fight with Fury on the horizon, The Cat responded: “Yes, of course, I do regard this fight a huge one. I see him a as a very good fighter, good athlete, he talks a lot he has a tongue.

“He claims he’s the king of the kings, but it’s only he who things that. That’s what I can say about him.”

Further quizzed over whether he can be the man to finally beat the undefeated Gypsy King, Usyk said: “Before my Joshua fight everyone was saying that I haven’t got a single chance to win and beat Joshua.

On Fury’s tricky style, Usyk was noncommittal: “I can’t comment much on his style because every fighter has his own style according to his own abilities and his own tendencies.

“So, I think the main thing is his style brings him the victories.

“That’s the main thing. Some people like it, some people do not. But he is successful.”