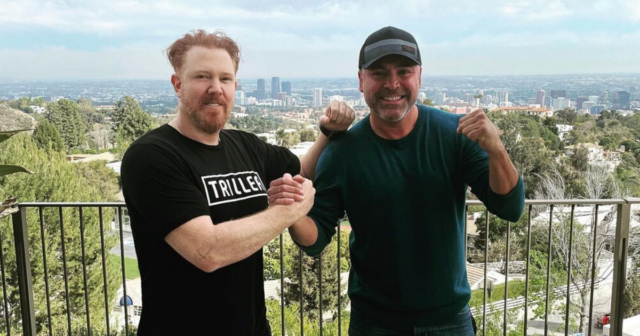 OSCAR DE LA HOYA will put his professional boxing record on the line against ex-UFC champion Vitor Belfort when they fight.

The pair were initially set to box in an exhibition bout, but it will now be a professionally sanctioned contest at the Staples Center in Los Angeles.

According to ESPN, the fight has been approved by the California State Athletic Commission.

But it is subject to De La Hoya, 48, and and Belfort, 44, passing comprehensive medical testing for 40-year-old-plus fighters.

It will also be at 180 pounds, but De La Hoya and Belfort can weigh within five pounds of the limit.

Triller will promote the event as part of their ‘Fight Club’ banner, which has also featured YouTuber Jake Paul, 24, and Mike Tyson, 55, previously.

But the brains behind the operation, Hollywood film producer Ryan Kavanaugh, was keen to move away from exhibition bouts.

He said: “It’s important to transition from exhibitions.

“This is as real as any fight Oscar or Belfort has had, not some staged wrestling event.”

De La Hoya, a six-weight world champion, retired in 2008 after a one-sided loss to fellow legend Manny Pacquiao, who is still fighting aged 42.

In the 13 years since, he has focussed on his Golden Boy promotions banner.

But after watching Tyson come out of retirement after 15 years, later drawing in an exhibition with Roy Jones Jr, 52, it inspired De La Hoya.

But the Brazilian – who is 1-0 as a boxer winning his debut in 2006 – recently linked up with Triller to pursue boxing.

Advertisement. Scroll to continue reading.
In this article:hasbeen, ontheline, vitorbelfort