Oscar De La Hoya rages ‘are you f***ing kidding me?’ when asked who would win between himself and a prime Canelo Alvarez
Advertisement 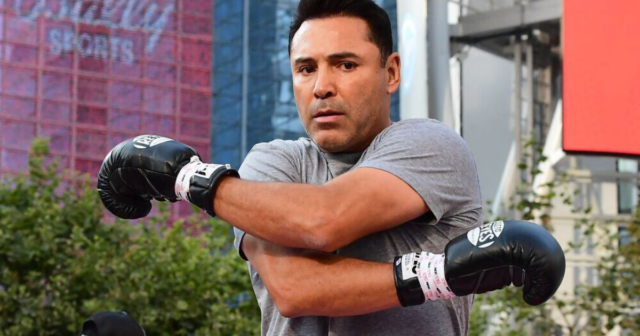 De La Hoya previously promoted the Mexican superstar until the pair fell out explosively over a bumper broadcast deal.

The split resulted in lawsuits and has since seen former six-weight world champion De La Hoya calling for Canelo to face him in the ring.

Now De La Hoya has reacted dismissively to being asked who would win in a fight between the men if both were ‘in their prime’.

The lawsuit alleged Golden Boy and DAZN had caused a minimum of £216m in damages.

With the four-weight champion no longer part of his stable, De La Hoya then called out Canelo and taunted him for ‘only having power’.

As recently as July the 48-year-old was still talking up a potential bout with the man 17 years his junior.

But De La Hoya has since turned his attention to calling out former rival Floyd Mayweather for a potential payday.

Canelo next fights American Caleb Plant in November in an attempt to unify the super-middleweight division.

The pair recently brawled at a pre-fight press conference, with Plant suffering a gash to his face from a surprise Canelo punch.

Advertisement. Scroll to continue reading.
In this article:dela, lahoya, warofwords