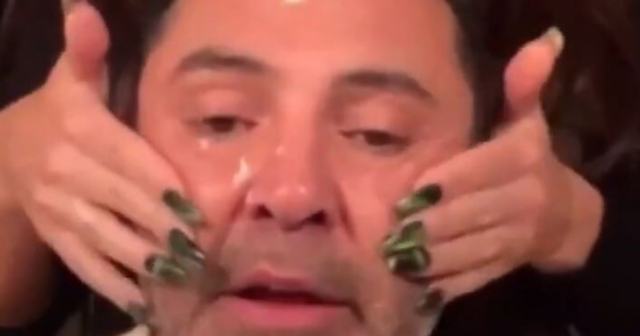 The American legend posted a bizarre video online in which he took aim at AJ’s Essex-based promoter.

Joshua suffered a shock defeat at the hands of Oleksandr Usyk on Saturday night.

The Brit has been criticised for his tactics with his trainer Rob McCracken coming in for particular flack.

But in an odd move, De La Hoya, 48, posted a clip of himself being pampered and slamming Hearn, 42, at the same time.

The Golden Boy promotions founder said: “Joshua vs Usyk, which nobody saw in the US because… what’s that promoter that has no clue what to do in the US?

“I think his name is Hearn or something.”

De La Hoya then pretended to forget his fellow promoter’s name and said: “Thomas Hearn, stay in the UK and promote your fights.

“You have no clue what you’re doing in the US.

“DAZN is doing the right thing sticking with Golden Boy.

“Stay away from the US. He does not know how to promote.

After the fight, Hearn confirmed Joshua would immediately trigger his rematch clause with Usyk.

But the promoter has urged AJ to change his style in the second fight with Ukrainian after saying trying to outbox Usyk was a ‘terrible idea’.

The promoter was involved in a vicious spat with a fan on Saturday at Tottenham’s stadium.

He was called a ‘p****’ by a member of the crowd before spinning round and asking the man to repeat his jibe before shouting: “Yeah, you s*** yourself now.”

But Hearn has since admitted he regrets his actions.

He told iFL TV: “I shouldn’t have done it, but we spend our lives listening to people online that give you abuse.

“It’s not because I’m a tough guy. At that moment I would’ve taken on about 40 people!

“But yeah, I shouldn’t have done it.”

Did you miss our previous article…
https://www.sportingexcitement.com/boxing/stunning-baseball-flasher-julia-rose-appears-to-confirm-jake-paul-relationship-is-back-on-with-hilarious-bath-snap