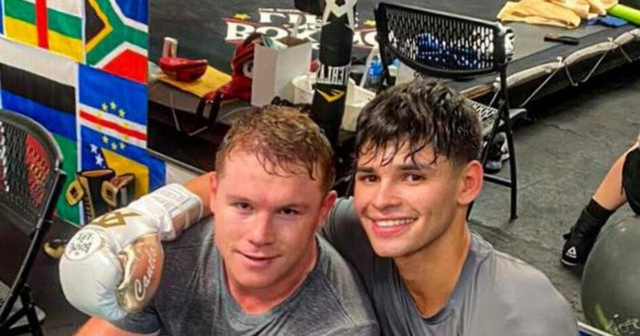 Garcia was once under Canelo and coach Eddy Reynoso’s wing, training at their adopted US training base of San Diego.

But the lightweight prospect has since left the gym and faced criticism from boxing’s current pound-for-pound king.

Canelo, 31, told EsNEWS: “Eddy has time for all the fighters, you ask everybody.

“If you have the time to put in the gym and train really good with discipline, Eddy is always going to be there.”

“The first camp I had with Eddy went great, then everything went bad.

“He only showed up two weeks before Fonseca fight and that’s when I first asked my manager to talk to him about finding a new trainer.

“Vergil Ortiz left because Eddy never showed. Frank Sanchez had a fight where Eddy only showed up the day of the fight, so ask Canelo to explain that!

“Let’s stop the back and forth and focus on the fights at hand. By the way, I’ve got nothing but respect for Eddy, it’s just the truth.”

Canelo is set to return on May 7 against WBA light-heavyweight champion Dmitry Bivol, 31, in Las Vegas.

Meanwhile Garcia will fight Emmanuel Tagoe, 33, on his boxing comeback on April 9.

The rising contender appears ready to put his feud with Canelo to bed – but his promoter has other ideas.

In this article:caneloalvarez, lahoya, ryangarcia