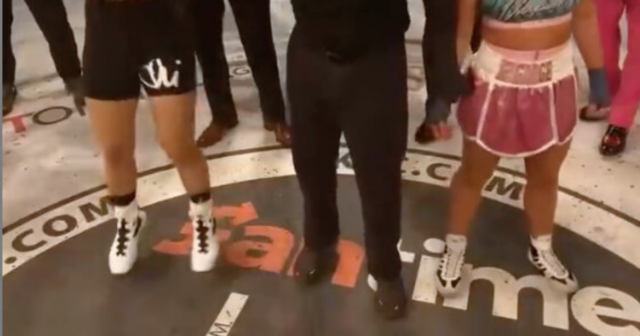 But it was Ostovich – defeated by VanZant in the UFC two years ago – who was awarded the verdict on the judges scorecards.

She said: “It’s been a long time, two and a half years since the last time we’ve been in the cage.

“No different, still sport but I still felt Page VanZant fought her heart out. A round of applause, show some respect.”

VanZant, 27, started out the aggressor in the opening round coming forward and even landed a heavy-looking right hand.

But as the pair began to find their range early on, lots of clinching led to dirty boxing on the inside.

In the second round, it was contested largely at range but Ostovich, 30, began to look more comfortable.

It set the American up for a big third round, where her right hand could barley miss over the top.

A combination towards the end put Ostovich in the driving seat heading into the second half of the fight, where her right proved decisive.

In the fourth, one counter overhand towards the end of the round landed flush on VanZant, who was forced to grab and hold.

Ostovich continued the pressure in the final round landing the cleaner shots, despite PVZ’s determination.

VanZant’s aggression opened her up for counters coming in, and left the judges with no doubt who the winner was.

Two scored it 48-47 in favour of Ostovich and one 49-46, giving the Hawaiian the perfect BKFC debut.

For VanZant, she is now 0-2 in bare-knuckle, having lost her debut to Britain Hart, 31, in February.

Advertisement. Scroll to continue reading.
In this article:bareknuckle, paigevanzant, yearsago