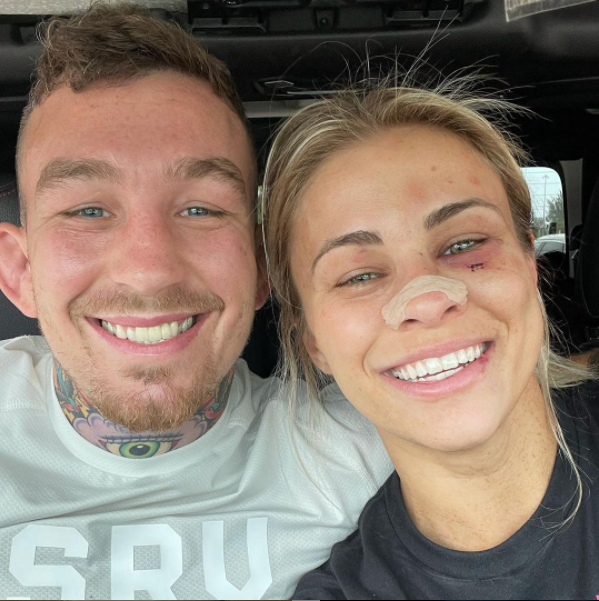 PAIGE VANZANT revealed her battered and bruised face but has refused to ‘quit when s*** get tough’ after debuting in BKFC.

The former UFC flyweight was beaten on her brutal bare-knuckle bow on points by Britain Hart.

VanZant did not do a post-fight interview or show at the press conference, but she addressed her defeat online.

Supported by husband and Bellator MMA fighter Austin Vanderford, PVZ promised fans she will bounce back.

VanZant, 26, wrote: “Ok, last post for today.I love this man more then anything on earth.

“Thank you so much for constantly supporting me and reminding me who the f*** I am. I am Paige Mother F***ing Vanzant.

“I don’t quit when s*** get tough. I’m in this for the long haul and I don’t give a fuck what any of you have to say about it.”

VanZant also posted a message to BKFC president David Feldman and confirmed her intentions to fight with exposed fists again.

She captioned the picture: “I’m not going anywhere boss!!!!”

It comes after Feldman confirmed VanZant can still campaign in BKFC following her gutsy performance, regardless of the result.

He told MMAJunkie: “I was impressed by what she did.

“It’s not the result she wanted, but at the same time for the company and the future for her, she still has a future here.

“I think she was a little bit surprised when she was in there.

“She has no quit in her and you could really see in the fourth and fifth round she really started to come on.

“I take my hat off to Paige. Win, lose or draw, just the fact she did something she didn’t have to do is really impressive.

“She wanted to prove to herself that she could do this. I take my hat off to her and I expect her to come back.

“She didn’t take a beating. She got edged in a close fight.”