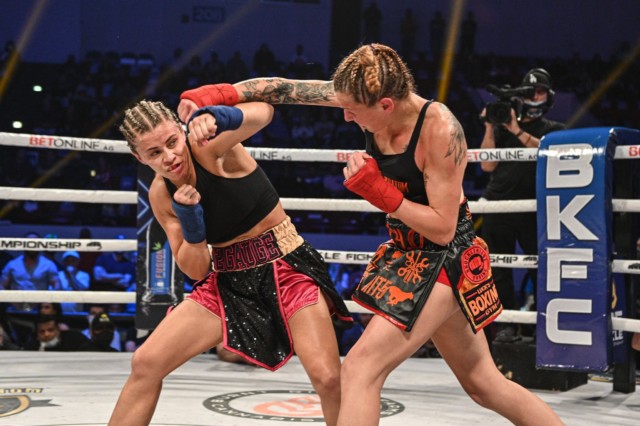 But she did leave her mark in the five, two-minute round bout after knocking out one of her opponent’s teeth.

Hart – who also lost a tooth against Bec Rawlings in July 2019 – made the reveal in her post-fight interview.

She said: “This is awesome. This is as big as you make it.

But the former UFC flyweight, 26, was more accurate, landing five more with 61.

In the post-fight press conference Hart – who has had 11 pro boxing bouts and four in bare-knuckle – admitted VanZant was her hardest-hitting opponent.

The 31-year-old said: “I hope the boss man fixes my teeth again. That would be nice.

“I started off with crooked teeth, then Bec helped get them really straight and Paige, credit to her.

“I’ve never been hit as hard as as Paige VanZant hits. I’ll give her that, so everyone got it right whoever said that girl’s got power.

“They were not lying, that’s the hardest I’ve ever been hit.”

Advertisement. Scroll to continue reading.
In this article:britainhart, paigevanzant, thefive